Will There Be a Black Pope? 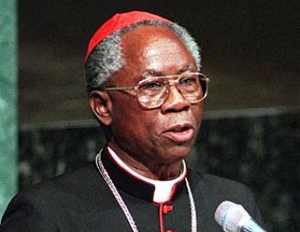 Everyone watched in shock as news of Pope Benedict XVI’s resignation hit. It’s the first time since the 1400s that a leader of the Catholic Church has made such a move, causing quite an uproar and speculations of who will next take the helm.

Ironically enough, gambling bookies are taking bets on who will fill his shoes, upon his retirement Feb. 28, with popular gaming and sports blog Paddy Power citing several men of the cloth, including two African cardinals, as likely candidates.

Cardinal Francis Arinze, 80, is an Igbo Nigerian Cardinal of the Roman Catholic Church. According to reports, he has been touted as a shoe-in since before Pope John Paul II and was a leading candidate in 2005. During the Nigeria-Biafra war, when he served as Archbishop of Onitsha, a city in southeastern Nigerian, he directed the distribution of food and medical supplies to the poor in a region. He became a cardinal in 1985 and “is known for his tolerance of elements of traditional worship in Catholic mass.”

Cardinal Peter Turkson, 64, of Ghana, is also a contender, having been a cardinal since 2003. He’s the president of the Pontifical Council for Justice and Peace, which works toward international advocacy of justice, peace, and human rights from the Roman Catholic Church’s perspective. Turkson speaks six languages and is the first Ghanaian cardinal, and has been described as “one of Africa’s most energetic church leaders.”

With more than 270 million Catholics of African descent worldwide, Pope Benedict’s resignation brings question of a groundbreaking succession. If either of these cardinals are elected, they will make history as the first black, modern-day pope.