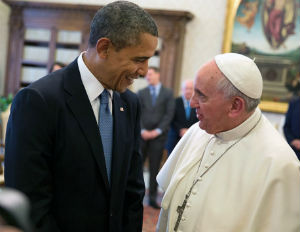 Last June, Pope Francis issued a 183 page document, the Papal encyclical, called Laudato si’ Praise be to you – On Care For Our Common Home, which calls on people, especially the world’s rich, to take steps to reduce reliance and consumption of fossil fuels.

“The poor and the Earth are shouting,â€ reads Pope Francis’ encyclical.Â  “Today, however, we have to realize that a true ecological approach always becomes a social approach; it must integrate questions of justice in debates on the environment, so as to hear both the cry of the earth and the cry of the poor,â€Â it states, touching on the fact that when the poor suffer a loss of resources or the impact of a weather event, it is much harder for them to bounce back in the short and long term — think Hurricane Katrina.

Father Michael Crosby, a long-time corporate social responsibility advocate, belongs to the Midwest Province of the Capuchin Franciscans, where he lives in fraternity with other priests serving the poor in Milwaukee’s downtown area.

“In 1986, the United States Conference of Catholic Bishops, came out with a statement on the economy that said Catholics, individuals, and institutions should be bringing ethical decisions to their investment decisions and . . . economic justice through the use of their stocks in corporations,â€ he tells BE.

“It’s very important, because if we don’t use our investment in those companies that are doing things that are impacting people around human rights, the planet, and pollution, we’re letting the company dictate our vision instead of human responsibility. This is about getting to the values that Jesus proclaimed about the dignity of people,â€ he adds.

Father Michael, who attended Exxon’s annual meeting in May, and urged the company to appoint an expert to the board to advise on renewable energy, hopes the Pope’s encyclical, platform, and popularity, will push others in the Catholic Church to take a stronger stance and call on members to put their money where their values are.

“We’ve been talking about corporate social responsibility for a long time in the Catholic Church, but Bishops haven’t been activists. The Pope is very public about this, although the impact remains to be seen. Let’s hope he can be a stimulant to others.â€

It’s impossible to say how much money Catholic investors control. Christian Brothers Investment Services in Chicago alone, has more than $6 billion under management.

Perhaps his message is starting to sink in. According to proxymonitor.org, Catholic groups have submitted 12 environment-related shareholder proposals in 2015, up from just 7 in 2014.