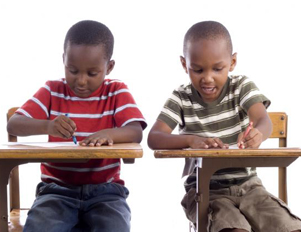 Boys are falling behind; they graduate from high school and attend college at lower rates than girls, and are more likely to get in trouble, which can hurt them when they enter the job market.

This gender gapÂ exists across the United States, but it is far bigger for poor people and for black people. As society becomes more unequal, it seems, it hurts boys more.

New research from social scientists offers one explanation: boys are more sensitive than girls to disadvantage. Any disadvantage, like growing up in poverty, in a bad neighborhood, or without a father, takes more of a toll on boys than on their sisters. That realization could be a starting point for educators, parents, and policy makers who are trying to figure out how to help boys–particularly those from black, Latino, and immigrant families.

“It’s something about family disadvantage itself,â€ saidÂ David Figlio, a Northwestern University economist and co-author of aÂ new paperÂ presented publicly for the first time on Thursday. “Black people in America are more disadvantaged than white people in America, and if we were to reduce the disadvantage, we may see a reduction in the relative gender gap as well.â€

Marianne Bertrand, an economist at the University of Chicago, who with Jessica Pan hasÂ studied the gender gap, also found that boys fare worse than girls in disadvantaged homes and are more responsive than girls to parental time and resources. “Their findings were very consistent: families that invest more in children are protective for boys,â€ she said.

The reasons that boys react more negatively to disadvantage are varied and hard to pinpoint. Even in utero, boys are more sensitive to extreme stress than girls, and tend to have moreÂ unruly temperaments. Society discourages boys from showing vulnerability. Low-income families are often led by single mothers, which has been found to affect boys differently than girls.