5 Ways You Can Help Fix Our Schools 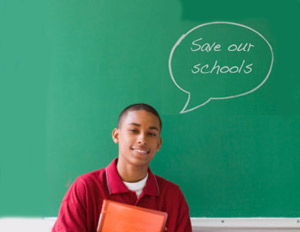 “Our biggest problem is us. We must own this issue,”Â  asserted Daryl Cobb, partner and vice president ofÂ  the Charter School Growth Fund as he challenged an audience of Black men and women to make a rock-solid commitment to fix America’s schools.Â  He was one ofÂ  five leading education reform advocates and experts on a panel I moderated at the 100 Black Men of America, Inc Conference in San Francisco this past weekend. All agreed thousands of urban public schools across the nation continue to fail millions of African American youth. Too many of these institutions churn out barely functional graduates or become dropout factories in which 60% or more of the freshman class don’t make it through four years to obtain a diploma.

Our nation has been wrestling with the deterioration of public education since I was a high school student some 30 years ago. In the late 1970s, the common refrain was “Johnny can’t read.”Â  We now gave large numbers of Jeromes, Tykishas and Juans who not only can’t read and calculate but won’t be employable for the 21st Century workplace.

Allan C. Golston, president, U.S. Program, the Bill and Melinda Gates Foundation, confirmed that fact. After praising the 100 for creating a platform to tackle this massive problem, he then rattled off some rather alarming stats: Global management consulting firm McKinsey & Co. found that Black and Latino students are roughly two to three years of learning behind White students and 48% of Black and 43% of Latino fourth- and eighth-graders score below the basic level in math and reading on the National Assessment of Educational Progress versus 17% of Whites. Although American students of all races and both genders have underperformed when compared to their counterparts across the globe–15-year-olds rank 25th out of 30 developed nations in math and 24th out of 30 in science–the overall graduation rate for Black males stands at 47%. If national leaders had worked to close the racial gap among U.S. students during the 1980s and 1990s, Golston maintains, the nation’s GDP would have increased by as much as $525 billion. To buttress his point, President Obama has placed education reform through this administration’s “Race To The Top” program at the top of his agenda in bolstering the future competitiveness of American businesses.

Fixing our schools, however, has come with its share of controversy. The most newsworthy issues have been related to teachers’ union mandates in which tenured educators–even the most unproductive–cannot be readily dismissed by school districts as well as whether traditional schools or charter schools offer the most efficient and effective means of educating our children.Â  Take the response to recent action of the NAACP and United Federation of Teachers Union after the organizations filed suit in Manhattan Supreme Court to stop the closure of 22 New York City public schools and block 20 charter schools from opening. As a result, hundreds of parents stormed the state office building in Harlem to demand the nation’s oldest civil rights group withdraw from the suit.

Golston says it will require “the best ideas, best energy and best investment” to reverse the trend. My panel proposed the following steps: