The Power of Awkward: 3 Ways to Leverage Quirks in Leadership 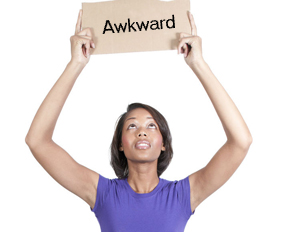 It used to be quite taboo to be the awkward coworker, friend or beau. Being awkward, like the concept of being a “geek,” just wasn’t the cool thing a decade or so ago.

Now, award-winning celebrities and creatives like “Awkward Black Girl” creator Issa Rae and “Girls” creator and star Lena Dunham, have made it cool to be, well, not-so-cool yet extraordinarily unique and wacky.

We’ve all had our awkward moments (or years), and I’m no exception. As a youth, I’d often gravitate toward peers who were more likely to be shunned by the popular girls. I’d be intrigued by their defiance of peer pressures and teen trends—whether by choice or by circumstance. Maybe they wore sweatsuits and green hair to the sixth grade dance (while the popular crew wore braids in scrunchies and stonewashed ensembles), or they were more likely to brag about their Lisa Frank wares than share giggly anecdotes about the boys that left sweetheart candy at their lockers.

Even as an adult, sometimes I find myself staring in silence as someone gossips about a celebrity at the office or laments about inconsistent weather. (Upon abruptly changing the subject or simply exiting their presence without warning, the situation becomes awkward since some women feel these are great ice-breakers or greetings.)

I’ve been that girl who wore pink to an all-black party (not aware of the special color-code requirement) or the one who stopped a celebrity in their tracks to ask a question that no one else dared to ask. (I’d be absolutely clueless as to why there was ever apprehension since my impulses told me it was a valid issue that readers needed answers about.)

For me, awkward truly means going against what’s considered a norm and just doing you. Leaders are able to manipulate that quality so that it’s advanteous to them and what they’re trying to accomplish. Maturity (and quite a few snafus) have taught me that being awkward isn’t so bad, as long as you know your limits.

So, to pay homage to such a powerful—and now, monetizable—quirk in leadership, here are three ways to leverage the awkward in you:

1. Turn what might be seen as a weakness into opportunity for a power play. Oftentimes, when someone perceives another person as “awkward,” other not-so-great judgments can be made (ie. that you’re a pushover or you aren’t driven.) As Dunham, Rae and so many others have proven, being awkward doesn’t necessarily handicap your ability to do great things. So, when someone thinks this, and you’re an exemplary, smart, skilled individual, the other party has already given you an edge. It’s great to be awkward and totally awesome at what you do at the same time. It’s inevitable that someone will doubt you, leaving room not only for you to shine but make a major statement in doing so.

2. Awkward and humor are besties. Take them with you in building client relationships and expanding your network. Ever have that awkward moment near the elevator where you and another person both pause, step forward, almost collide, then pause again in synchronization until that one rude person just rushes past both of you and presses the “Door Close” button? What a great ice-breaker it would be to crack a joke and get to know what turns out to be the CEO of the company on the floor above you? I give that hypothetical scenario simply to illustrate that oftentimes awkward moments preface humor, and humor can be an awesome way to spark conversation with someone you might want to do business with.

3. Empower yourself knowing the experiences that might have made you “awkward” actually make you a bit more well-rounded than you think. My brother, who’s an engineer by trade and a really smart guy, would oftentimes be described as “awkward” throughout his teen and early adult years. When I think back to the source of this perception, I notice a common theme of unique experiences that led him to get the label (ie. growing up the only black guy who’d rather build Lego cities and read Star Trek books than play basketball or chase girls at the mall.) An advantage to being “awkward” is that you’re often forced to embrace your unique self and in embracing that, you’ve had experiences that have made you more welcoming of a diversity of ideas and people. You are also often more likely to be your own best friend and ultimately your best advocate. These are very marketable leadership qualities. (And it has worked wonders for my brother’s career and life fulfillment as a whole.)

Any unique qualities one has are great, especially in a challenging job market where professionals compete to stand out and be noticed. If you have awkward quirks, it’s a good idea to use them to your advantage, positioning yourself as a leader with a diverse perspective to bring to the table.

How are you able to leverage unique quirks to your advantage at work? #Soundoff and follow me on Twitter @JPHazelwood.

Embrace Your Power: The Moment is Now! Attend the Women of Power Summit hosted by State Farm, and explore all the ways you can achieve your professional and personal goals. This four-day event caters to executive women of color. It’s your opportunity to connect with other powerful women, develop professional strategies, and get expert advice from today’s leading female executives and decision makers. Register today!