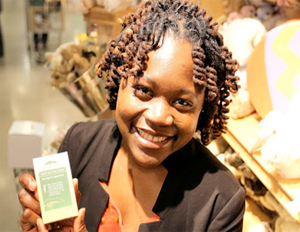 Many people don’t think about where shea butter comes from when they glide their favorite shea product onto their skin or hair, but Rahama Wright thinks about it every day. As founder of Shea Yeleen International, the socially conscious leader has made a business out of her passion for helping female shea butter producers.

Growing up in upstate New York, Wright’s Ghanaian heritage influenced her interest in African-related issues. After working and volunteering in West Africa and drawing on her mother’s stories as an immigrant in the United States, Wright committed herself to making the invisible women behind shea butter production visible to the world.

With patience and relentless diligence, she has grown her company—which initially started as a non-profit—with Shea Yeleen soaps, lip balms, and body butters now available in over 40 Whole Food stores in the United States.

In between meetings for the growing natural body care brand, Wright stopped to chat with BlackEnterprise.com about her career journey and commitment to women’s empowerment.

BlackEnterprise.com: What inspired you to use shea butter to empower women in West Africa?

Rahama Wright: It wasn’t until I did an internship at the American Embassy in Burkina Faso and started learning about income-generating activities for women in the Sahel region that I learned about shea butter. It struck me that this great product that was in so many mainstream haircare and skincare products came from this part of the world, yet there was a lack of visibility for the women producers in the marketplace.

After my internship, I served in the Peace Corps for two years in Mali, which was my first time living in a rural setting. Seeing a lot of the women in my community unable to send their kids to school or buy food or medicine made me want to do more than just say, ‘I served in the Peace Corps.’ So, I started researching income-generating activities for the women in my community, and shea butter came up again. When I returned to the U.S., I started Shea Yeleen to create a space that allowed market visibility for female shea producers.

You started Shea Yeleen at 23 with only a few years of work experience under your belt. What was it like to start the company so early in your career?

Honestly, I never thought I was too young to start a business, largely because I had no idea what I was getting myself into. I felt so strongly about the issue of supporting women shea producers, that I took the risk and didn’t look back. In hindsight, I was definitely under prepared because I had very little experience running an organization, but I have proven that with passion, commitment and persistence, anyone can accomplish whatever they envision.

I think the advantages of starting a company so young was that I had high energy and if I failed, I still had time to build a more traditional career. As a person in my early 20s, I felt the sky was the limit. A down side, however, was not having people take me seriously because I was so young. It was difficult to get the backing and support I needed early on. I believe the tide is turning and more organizations are looking to support young entrepreneurs, so I am a big believer that regardless of age anyone should feel confident in starting an enterprise.

How did you deal with setbacks along the way?

Persistence. I pitched to Whole Foods at different levels before and was rejected, but I didn’t let it get me down. When you are first starting, you can’t be afraid when people say no to you, you just have to learn, reposition yourself, and do a better job.

I also learned about programs that could help along the way.Â  Shea Yeleen was able to get into a program called YouthTrade which helps social entrepreneurs under the age of 35 bring their products to market. The program helped open a door, but I still had to do a lot of work to successfully get my products on the shelf.

Knowing everything you know now about your journey, what advice would you give other young leaders like yourself?

I would emphasize more patience, not letting rejection affect me as much as it did, and focusing more on identifying what types of skills I needed to help me grow my mission, rather than following leads that ended up being dead ends.

Nina Oduro (@NinaBasiwa) is the founder of AfricanDevJobs.com, a platform for Africa-based development job opportunities, professionals’ voices and career advice, with a special focus on highlighting the contributions of Africans and the African diaspora. Committed to women’s empowerment, education and youth leadership development, she serves an adviser, trainer and facilitator for programs and initiatives aimed at positive youth development in the U.S. and Africa.