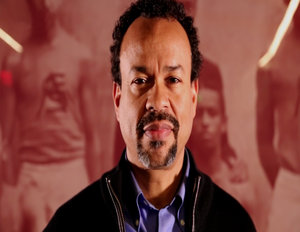 Sports business veteran, Claude Johnson is preserving and educating the world about the men and women who enabled many sports professionals, both on and off the court, to flourish today. After only hearing of two black teams in a Basketball Encyclopedia, Johnson knew there had to be more. He has been researching, preserving, exhibiting, and promoting the history of African American’s in basketball before the integration of the National Basketball Association in 1950, ever since.

After graduating from Carnegie Mellon and Stanford Universities, Johnson had a long career in the business of sports at top corporations including NBA Properties, Nike, American Express, Benetton Sportsystem and more. After gaining extensive experience in sports marketing, licensing, and apparel merchandising, he decided to put a larger focus and emphasis on building Black Fives, Inc, now the Black Fives Foundation.

Since the organization began, Johnson has published a Black Fives book, helped put together a video campaign with NBA players with Fox Sports Net, helped curate the first Black Fives exhibit at the New York Historical Society this year, had the “Hardwood Heroesâ€ featured in Sports Illustrated for Kids, and much more.

Johnson stated in his book: “I wanted to find out more, but no one seemed to know anything about these earlier [professional basketball] teams or their collective history — not the league’s [NBA] resident historian, not the reference librarians at the New York Public Library or at the Library of Congress, not even the curators at the Naismith Memorial Basketball Hall of Fame. It seemed that the history of the pioneers of the Black Fives Era of basketball had been lost, forgotten, buried, ignored, or all of the above.â€ He has been looking to change that ever since.

Black Enterprise caught up with Johnson to find out more about the organization and what’s next:

Why did you start the Black Fives Foundation and what is the mission?

I created the not-for-profit Black Fives Foundation to replace the previous commercial entity Black Fives, Inc. so that our organizational structure and operations could align more closely with our efforts, our activities, and our passion. I found that the majority of my time was spent selling things to stay profitable, rather than dedicating ourselves to a worthy cause. Though it seems subtle, the difference is profound.

We showcase the pre-1950 history of African Americans in basketball, a period known as the Black Fives Era, to engage and inspire youth while honoring its pioneers and their descendants. We make history more interesting with content and messaging that’s relevant today, in areas like leadership, teamwork, inclusion, Â business models, problem solving, and finding common ground. Our slogan is “Make History Now.â€

Why is it important for young people to be introduced to the Black Fives in a magazine like Sports Illustrated for Kids?

Any time a topic like history, which is often seen as boring or tedious, can be made relevant or fun, then that helps make the topic engaging enough to discuss, absorb, or even share outside of the classroom, which ultimately does its small part in helping close our country’s persistent academic achievement gap, particularly among African American boys. There aren’t too many platforms more relevant and fun for a certain age group than SI for Kids.

What project have you been most proud of since starting the organization?

When Barclays Center celebrated its opening last year by permanently installing a compilation of six mural-sized vintage Brooklyn-related African American basketball images that we provided to them, and recognized the descendants of the players in those photographs with a special ceremony at center court during halftime of a Nets game … that was extraordinary. The Mayor’s Office even declared the date, February 10, 2013, as “Black Fives Day” for the City of New York with a special proclamation. It meant so much, because it made us “official.”

Then earlier this year the New-York Historical Society asked me to guest curate the first-ever Black Fives museum exhibition, containing over 200 artifacts from our historical archive, which were on display this past spring in their Civil Rights Gallery. That was truly an honor and it got a superb full-page review in the museum section of the New York Times. When the new NBA Commissioner Adam Silver told me personally that he went to see the exhibit and thought it was terrific, this being right after the Donald Sterling drama, that of course was a huge thrill and powerful in its own way.

What’s next for you and the Black Fives Foundation?

Right now we are developing an educational program for the Brooklyn Nets, that will take a graphic panel version of the Black Fives museum exhibition into some of their local schools, along with a short film, actual artifacts for show & tell, and a presentation followed by discussion. We see it as a pilot that might expand into more Brooklyn schools next year as well as potentially to schools in other NBA cities. Adding an academic curriculum would be logical, and would give a generous underwriting corporate sponsor some very meaningful community visibility.

Mia Hall, (@mia_halldaily) is a freelance reporter, speaker, and host who focuses on the sports industry. She speaks and writes about personal development, diversity in sports business careers, community outreach, mentorship, and accountability. When she’s not speaking or hosting events in her role as a Community Manager at Barclays Center, she shares her stories, advice, videos, and musings on her personal blog, Mia’s Full Court Press.