President Biden Pushes Back On Criticism Of U.S. Exit From Afghanistan 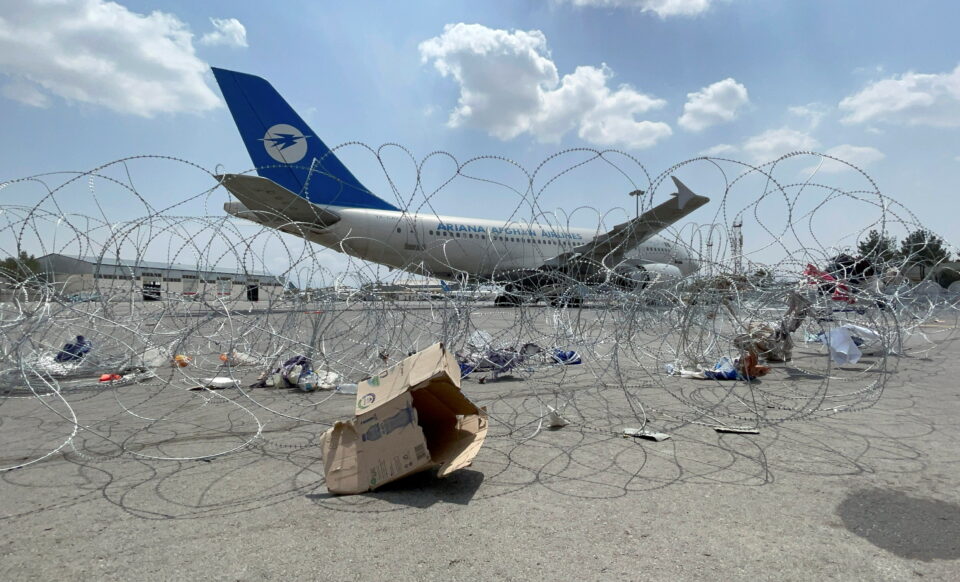 A commercial airplane is seen at the Hamid Karzai International Airport a day after U.S troops withdrawal in Kabul, Afghanistan August 31, 2021. REUTERS/Stringer

Reuters – President Joe Biden took responsibility on Tuesday for the tumultuous U.S. evacuation from Afghanistan, saying it was the best available option after a leading Republican foe described it as a self-inflicted wound that had made America less safe.

Earlier in the day, the Taliban celebrated their victory over the United States, firing guns into the air, parading coffins draped in U.S. and NATO flags and setting about enforcing their rule after the last U.S. troops withdrew.

In his first remarks since the final pullout, Biden said 90% of Americans who wanted to leave were able to do so, and that Washington had leverage over the Islamist militants to ensure 100 to 200 others could also depart if they wanted to.

“I take responsibility,” Biden said, adding that the United States was far from done with Afghanistan and, in particular, with Islamic State adherents in the country.

The Taliban now control more territory than when they last ruled before they were ousted in America’s longest war, which took the lives of nearly 2,500 U.S. troops and an estimated 240,000 Afghans, and cost some $2 trillion.

More than 123,000 people were evacuated from Kabul in a massive but chaotic airlift by the United States and its allies over the past two weeks, but many of those who helped Western nations during the war were left behind.

“This was a disgraceful and disastrous departure that will allow the Taliban and al Qaeda to celebrate the 20th anniversary of 9/11 by having complete control of Afghanistan,” he said at a business forum in Ashland, Kentucky. “We are less safe as a result of this self-inflicted wound.”

Biden said the evacuation was an extraordinary success and the only other option would have been to step up the fight. “That was the choice – the real choice – between leaving or escalating. I was not going to extend this forever war. And I was not extending a forever exit,’ he said.

In Afghanistan, there was a mixture of triumph and elation on the one side as the Taliban celebrated their victory, and fear on the other.

“We are proud of these moments, that we liberated our country from a great power,” Taliban spokesman Zabihullah Mujahid said at Kabul airport after a C-17 aircraft took the last troops out a minute before midnight, ending a hasty and humiliating exit for Washington and its NATO allies.

While crowds lined the streets of the eastern city of Khost for a mock funeral with coffins draped with Western flags, long lines formed in Kabul outside banks closed since the fall of the capital.

“I had to go to the bank with my mother but when I went, the Taliban (were) beating women with sticks,” said a 22-year-old woman who spoke on condition of anonymity because she feared for her safety.

She said the assault occurred among a crowd outside a branch of the Azizi Bank next to the Kabul Star Hotel in the centre of the capital. “It’s the first time I’ve seen something like that and it really frightened me.”

Biden has said the world would hold the Taliban to their commitment to allow safe passage for those wanting to leave Afghanistan in future, and to uphold human rights.

The U.S. invasion in 2001 stopped Afghanistan being used by al Qaeda as a base to attack the United States and ended a period of Taliban rule from 1996 in which women were oppressed and its opponents crushed.