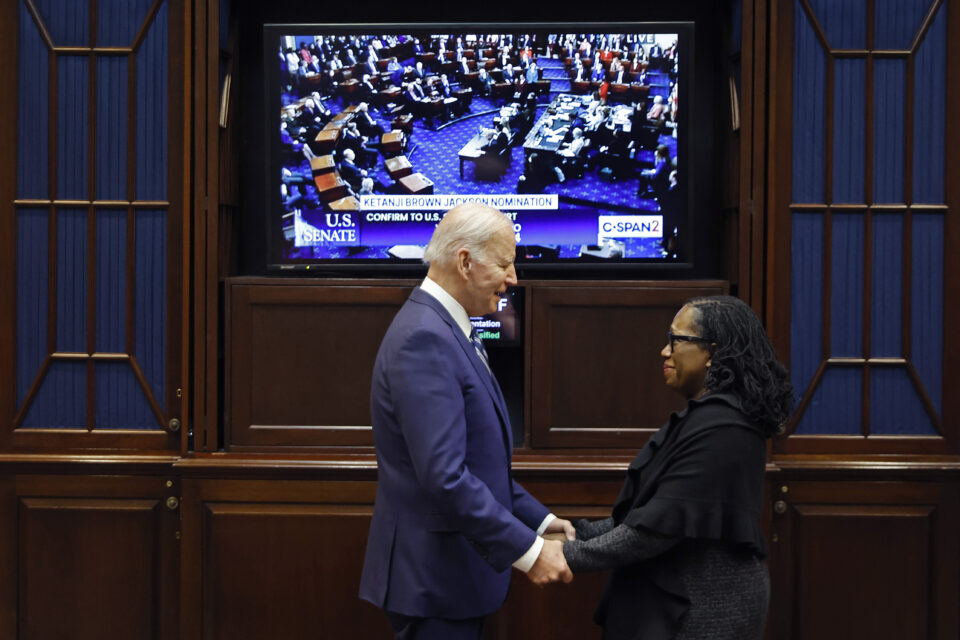 WASHINGTON, DC - APRIL 07: U.S. President Joe Biden congratulates Ketanji Brown Jackson moments after the U.S. Senate confirmed her to be the first Black woman to be a justice on the Supreme Court in the Roosevelt Room at the White House on April 07, 2022 in Washington, DC. (Photo by Chip Somodevilla/Getty Images)

Jackson was confirmed as the first Black female Supreme Court Justice in U.S. history by a 53-47 vote.  All 50 members of the Senate Democratic Caucus voted in favor of Jackson, as well as Republicans Sens. Susan Collins (R-ME), Mitt Romney (R-UT), and Lisa Murkowski (R-AK).

Judge Jackson’s confirmation was a historic moment for our nation. We’ve taken another step toward making our highest court reflect the diversity of America. She will be an incredible Justice, and I was honored to share this moment with her. pic.twitter.com/K8SAh25NL5

Presiding over the vote was Vice President Kamala Harris making the moment even more special for Black women. Jackson is just the third Black person to make the High Court after Thurgood Marshall and current Justice Clarence Thomas.

Jackson’s confirmation doesn’t change the conservative majority of the court but does fulfill a promise President Biden made to Majority Whip James Clyburn and represents a huge win for Biden while he continues to deal with ending the COVID-19 pandemic, immigration challenges on the Southern border, a rise in inflation, supply chain issues, and the Ukraine-Russia war.

Jackson sports a wealth of legal experience. She previously clerked for former Supreme Court Justice Stephen Breyer, who she will replace on the High Court. The Harvard University and Law School graduate also served as a federal public defender, a criterion that Biden committed to during his election run. Brown Jackson also served as a commissioner on the U.S. Sentencing Commission and was appointed to serve on the federal district court in D.C. by former President Barack Obama.

Last year, Biden elevated Jackson to the United States Court of Appeals for the District of Columbia Circuit, widely viewed as the second most powerful court in the country.

Jackson faced numerous attacks on her record and judicial philosophy during her confirmation hearings from Republicans, including Josh Hawley (R-MO) and Marsha Blackburn (R-Tenn). However, she made it through unscathed and even had a few moments that went viral. Additionally, New Jersey Democrat Cory Booker was Jackson’s biggest cheerleader during the hearings.