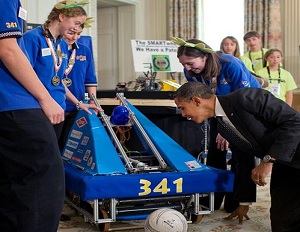 President Obama hosted the 2015 White House Science Fair today to celebrate the student winners of STEM competitions from around the country.

In addition to Senior Advisor Valarie Jarrett tweeting that for the first time ever there were more girls than boys at this year’s event, POTUS announced over $240 million in new private-sector commitments to inspire and prepare more students from underrepresented groups to excel in STEM fields. The commitment is a part of the president’s “Educate to Innovate” campaign that has resulted in over $1 billion in financial support for STEM programs.

Some of the commitments outlined in the president’s new pledge announcement include a $150 million philanthropic effort to empower early-career scientists to stay on track with their career goals and a $90 million “Let Everyone Dream” campaign to expand STEM opportunities for underrepresented youth. In addition, the pledge includes a commitment from 120 colleges and universities to train 20,000 engineers, a $25 million Department of Education commitment to create science and literacy themed media, and a coalition of CEOs who commit to expand STEM programs to an additional 1.5 million students this year.

Bringing together over 100 students from more than 30 states, the White House Science Fair allowed approximately 35 student teams to showcase their projects this year, including exhibits on algae, spinal implants, keystroke security and a page turner made out of Legos.

“Every year I walk out smarter than when I walked in,” said Obama, who’s stated before that if NCAA champs are invited to the White House then so should young people who produce the best experiments or design.