President Obama Says U.S. Will 'Take Out' ISIL 'Wherever They Exist' 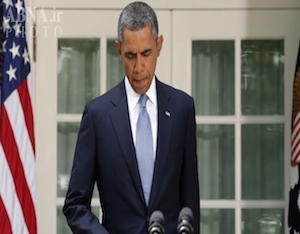 On Sept. 10, President Barack Obama delivered a prime-time speech detailing the United States plans to “take out” the Islamic State of Iraq and the Levant (ISIL) “wherever they exist.”

“With a new Iraqi government in place, and following consultations with allies abroad and Congress at home, I can announce that America will lead a broad coalition to roll back this terrorist threat,” Obama said. “Our object is clear: we will degrade, and ultimately destroy, ISIL through a comprehensive and sustained counter-terrorism strategy.”

President Obama outlined his broad American offensive by detailing how he would “not hesitate” to order strikes against Islamic State targets in Syria. Already given the authorization to conduct said offensive, Obama openly invited congressional support “to show the world that Americans are united in confronting this danger.”

For those unaware of the Islamic State, better known as ISIL or ISIS, the organization came to international consciousness over the summer, when it began a brazen attack on Iraq. Since then, the Sunni militant group has overthrown several Iraqi cities and has beheaded two American journalists. “I have made it clear that we will hunt down terrorists who threaten our country, wherever they are,” Obama said to the American public. “This is a core principle of my presidency: if you threaten America, you will find no safe haven.”

Obama was quick to mention that unlike the Afghanistan campaign, this effort won’t require troops on the ground to fight on the front lines. “This counter-terrorism campaign will be waged through a steady, relentless effort to take out ISIL wherever they exist using our air power and our support for partner forces on the ground,” Obama said. “This strategy of taking out terrorists who threaten us, while supporting partners on the front lines, is one that we have successfully pursued in Yemen and Somalia for years.”

If left unchecked, ISIL could pose a threat to the world, not just America, so the president listed a four-point plan to decimate the terrorist organization, which you can read for yourself below:

“First, we will conduct a systematic campaign of airstrikes against these terrorists. Working alongside the Iraqi government, we’ll expand our efforts beyond protecting our own people to hit ISIL targets as Iraqi forces go on offense. And we will continue to hunt down terrorists who threaten our country, whether in Iraq or Syria. They will learn what leaders of other terrorist organizations have already learned: If you threaten America, you will find no safe haven.

Second, we will increase our support to the forces fighting these terrorists on the ground. We will send an additional 475 service members to Iraq to support Iraqi and Kurdish security forces. These American forces will not have a combat mission. But they are needed to support Iraqi and Kurdish forces with training, intelligence, and equipment — and tonight, I again called on Congress to give our military the additional authorities and resources it needs to train and equip the Syrian opposition fighters.

And fourth, we will continue to provide humanitarian assistance to the innocent civilians displaced by this terrorism organization. This includes Sunni and Shia Muslims who have borne the brunt of this terror, as well as tens of thousands of Christians and other religious minorities.
I have the authority to address the threat from ISIL. But I believe we are strongest as a nation when the President and Congress work together. So I welcome congressional action to support this effort in order to show the world that Americans are united in confronting this danger.

Watch the president’s speech in full below: