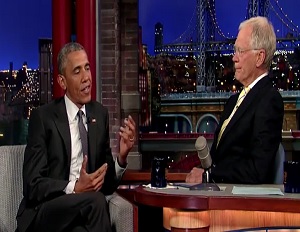 Monday night, President Obama appeared on the Late Show with David Letterman to discuss current happenings in the White House and his plans for retirement once his term ends.

POTUS joked about envisioning a future of playing dominoes with the talk show host, who is also gearing up for retirement with his final show airing on May 20th.

“I was thinking me and you could play some dominoes together,” joked Obama. “You know, go to the local Starbucks and …swap stories.”

In addition to letting it be known that he was a pretty good dominoes player, Letterman made a joke in reference to reports of the president resuming his teaching career when his presidential term ends.

“I plan to teach law at Columbia,” Letterman said.

Obama replied, “I’ll be interested in sitting in on that class — I’d bet that’d be a hoot.”

Last month, reports surfaced that the president was in talks of moving to New York and becoming a professor at Columbia Law School after his White House exit. While nothing has been confirmed about his post-presidential plans, a teaching career at Columbia would not be foreign to the president who earned his undergraduate degree from the university in 1983 and who taught courses in constitutional law at the University of Chicago from 1992 until his U.S. Senate election in 2004.

Letterman also reported that President Obama told him on commercial break that he plans to take a month off after leaving the White House on January 20, 2017.

“Are you kidding me?” Letterman said. “After eight years of this, you’re only taking a month off?”

[Below: Watch a clip from Obama and Letterman’s interview where the two talk about their post-career plans]