Presidential Candidates Trade Punches But America Gets an Uppercut 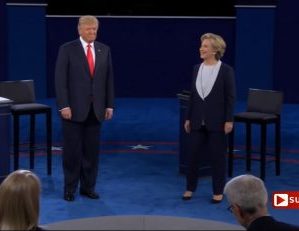 The second debate opened with perfunctory grins, exchanges of platitudes, and no handshake–which all signified the likelihood that candidates would trade political punches in the town hall style setting.

Well, that’s what happened–but not before the first question from aÂ town hall guest, which asked the candidates if they believe that they are modeling positive behavior as role models for today’s youth. Although neither candidate answered the question, Secretary Hillary Clinton provided a response that highlighted the need for the country to expel divisiveness, heal broken relationships, embrace diversity, and give everyone an opportunity to succeed.

In an even-keeled tone, businessman Donald Trump provided the shock of the debate, when he agreed with everything that Hillary said. He added that America is a great country, while highlighting several economic issues that must be addressed to provide prosperity for all.

Then, the gloves came off.

Trump was asked by CNN anchor and co-moderator Anderson Cooper about his comments related to the audio leak in which Trump is heard crudely discussing groping and touching female genitalia. Trump replied by saying that he apologized to his family and the American people, describing his comments as, “locker room talk.â€ Additionally, he stated that he has not touched women the way he spoke about it on the recording. Trump then, perhaps, recorded his first presidential debate pivot by talking about ISIS. This was a stark contrast from the way he comported himself in the first debate, where he was defensive.

Another pivot from debate standards was Trump’s decision to hold a pre-debate press conference. The conference included a few women who have alleged that President Bill Clinton sexually assaulted them in the past, along with another woman that wasÂ raped at 12 years old and watched Secretary Clinton, then an attorney for the state of Arkansas, defend the rapist. This case concluded with a plea bargain with no time jail time. Perhaps, the implied message of this press conference was that President Bill Clinton’s escapades may still be taking place.

Trump wasn’tÂ the only one that pivoted from debate protocols. The second moderator, Martha Raddatz of ABC News, added more fuel to the fiery debate by acting as a third-party candidate on stage, when she went toe-to-toe with Trump. She asked Trump, “If you were president, what would you do about Syria and the humanitarian crisis in Aleppo?” Unlike Libertarian candidate Gary Johnson, Trump knew what Aleppo was and the related crisis there. However, Trump didn’t answer to Raddatz’s satisfaction, which resulted in an embarrassing exchange of words between she and the Republican canidate.

Meanwhile, Hillary was asked regarding the excerpts from her highly paid speeches to Wall Street constituents, which were exposed byÂ Wikileaks and revealed her public and private positions on a myriad of topics, includingÂ  immigration based on open borders and free trade. Hillary deflected by making a highly questionable connection of her comments to ones made by President Abraham Lincoln, stating that Lincoln also had public and private positions on sensitive topics confronting America at the time of his presidency. I am not sure of everyone else, but how Hillary could compare her nefarious statements to that of honest Abe Lincoln left me scratching my head. Such a statement was not a good way for Hillary to court Independent and Republican voters from veering in Trump’s direction, not to mention Bernie’s voters, who are vehemently against trade deals that siphon jobs from America.

Although the media leaks about each candidate were on the minds of those watching the debate, the showdown between Hillary and Trump was not short of personal attacks, all of which made it difficult to focus on real issues in America. The political swipes resonated with the audience and viewers at home. Possibly, the top rated one was Trump’s quip about putting Hillary in jail, if he ever became in charge of the country.

Hillary also accused Trump of using steel from China, which put American companies out of work.

This was unusual humor for Hillary, but such comments did score her a few points with the audience.

While Trump performed reasonably well, he lost the support of prominent Republicans, many of whom have rescinded their endorsements. With less than a month to go before Election Day, many people don’t expect Trump to regain support of these established, high profile Republicans.

Both Trump and Clinton pivoted throughout the debate, focusing on campaign damage control efforts and attacking each other. Such behavior has left many undecided voters craving for valid reasons to cast a ballot in favor of either. The politicalÂ jabs amused some, but also left others punch-drunk from a fierce uppercuts. Those watching were left wondering when the candidates and moderators would solely focus on issues that were important to voters, like job growth, education, and national security.

Well, there is hope for the third debate, which is scheduled on October 19. Until then, undecided voters will still be left pondering how it was that we ended up with the binary choice of the lesser of two evils.