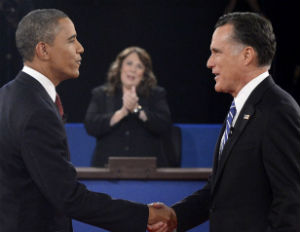 The second of three presidential debates took place at Hofstra University, Tuesday night and if you missed it, here are my top 5 takeaways.

2. Just like the first debate, Moderate Mitt showed up.

Mitt Romney didn’t throw out his etch-a-sketch for the second debate. Â Similar to the first debate, Romney tried his best to shift his positions to the middle on taxes, immigration, and women. Â It likely won’t work as well as it did in the first debate because the media has called out many of those misleading claims and the president pushed back effectively mid-debate to make sure viewers weren’t fooled again.

Mitt Romney and Republicans have tried very hard to attack the Obama administration on their response to what took place in Benghazi, Libya. Â The murder of 4 brave diplomats, including our Ambassador Christopher Stevens is an area where the president is vulnerable, but unlike past administrations, Team Obama has been transparent leading to some changes in the interpretations of what happened. Â Mitt Romney falsely claimed that President Obama did not call the attacks in Benghazi an “act of terrorâ€ the day after in the Rose Garden and he was fact checked mid-debate by the moderator Candy Crowley. Â It appeared that Romney didn’t recover from that mistake for the rest of the debate.

Mitt Romney took far right positions on immigration in order to win the Republican primary, namely promoting the idea of self-deportation (when conditions in the country are so bad immigrants voluntarily return home), and tonight he finally had to answer for that. Â The president effectively attacked Romney for being out of touch on immigration but Obama is also vulnerable on the issue since he failed to pass comprehensive reform in his first term like he promised in 2008. Â Congressional obstruction is to blame for inaction and President Obama made sure viewers knew that.

There were no questions dealing with equal pay for women in the first two debates but one townhall participate finally asked the candidates about this issue Tuesday night. Â President Obama’s answer on equal pay, touting Lily Ledbetter Fair Pay Act as his first piece of signed legislation, was so solid it could win him the election outright. Â The president noted, “women are increasingly the breadwinners in the family. This is not just a women’s issue, this is a family issue, this is a middle-class issue, and that’s why we’ve got to fight for it.â€

Contrast this with Mitt Romney’s “we’ll get back to youâ€ response on whether he would have signed Lily Ledbetter and his instantly meme-able and strange comment about having “binders full of womenâ€ to fill jobs in his cabinet as governor, Obama comes out ahead.

Women will decide who the next occupant of the White House is and President Obama successfully communicated that he’s on the side of women, he wants them to have bodily autonomy, equal pay, and affordable health care. Â President Obama framed reproductive health care issues as economic issues which should be compelling, especially to younger women.

47%! Â The first mention of Mitt Romney’s 47% comments came in the final moments of the debate where the president hit Romney for not supporting all Americans and instead favoring only the rich. Â President Obama cited the working poor, veterans, and seniors – all who do not pay income taxes – as hard working Americans who Romney writes off as “not taking personal responsibility.â€ Â This was a part of President Obama’s closing remarks, making it the last thing viewers heard Tuesday night, giving him the last word in a debate where he was already ahead.

President Obama comes out of the Hofstra debate the clear winner. Â Romney came into tonight’s debate with high expectations after winning decisively in Denver. Â The president’s supporters have had a nervous couple of weeks with national polls swinging in Mitt Romney’s favor and battlegrounds growing more competitive by the day. Â Last week’s win by Vice President Joe Biden helped but nothing would have blunted the Romney momentum like a stellar performance by the commander in chief. Â President Obama delivered and likely calmed many of his nervous supporters who were already booking plane tickets to Canada.