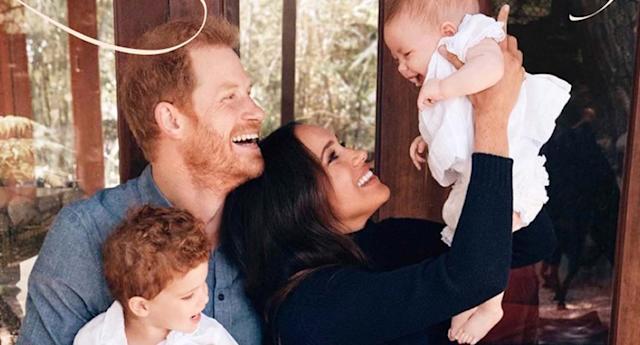 Prince Harry and Meghan Markle continue to ignore the haters while living their life like it’s golden.

Days after getting cheered and booed at Queen Elizabeth II’s Platinum Jubilee, the Duke and Duchess of Sussex shared a rare photo of their ginger-haired daughter Lilibet “Lili” Diana Mountbatten-Windsor.

Lili looks like a spitting image of her father in the adorable photo shot outside the family’s home in England, E! News reports. The growing toddler sported an ocean blue dress with a white lace bow in her red hair.

“It was such a privilege to celebrate the 1st birthday of Lilibet with my family and hers! Joy and face painting all around,” photographer Misan Harriman captioned the post.

The photos were taken at an intimate birthday party the Duke and Duchess hosted for family and close friends at Frogmore Cottage in England. Fans and supporters of the royal couple helped raise over $100,000 in donations to World Central Kitchen in Lilibet’s honor.

Members of the royal family took to social media to wish Lili a happy birthday, including Prince William and Kate Middleton, The Duke and Duchess of Cambridge, who tweeted, “Wishing a very happy birthday to Lilibet, turning one today!”

The family camaraderie comes days after Prince Harry and Markle were met with boos and loud jeering in between bursts of cheers while leaving St. Paul’s Cathedral in London holding hands. The pair have been subjected to harsh scrutiny after exiting the royal family in 2020.

The decision to leave the royals has caused a visible rift in the family. During the National Service of Thanksgiving event, Harry and Markle sat on opposite sides from his brother, Prince William, and sister-in-law, Kate Middleton, Page Six reports.

The Duke and Duchess of Sussex were instead seated with Harry’s cousins.