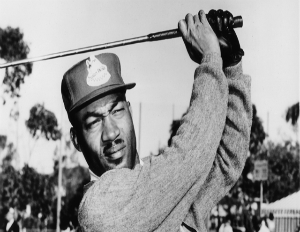 Long before Tiger Woods, there was Dr. Charles “Charlieâ€ Sifford who is credited for having the Caucasian-only clause in the PGA rescinded in 1961 and he was the first African-American inducted into the World Golf Hall of Fame in 2004. Â The trailblazer died at age 92 Tuesday night of a stroke, according to the Wall Street Journal.

President Barack Obama commended Sifford in a statement of condolences stating that “Charlie was the first African-American to earn a PGA tour card — often facing indignity and injustice even as he faced the competition. Though his best golf was already behind him, he proved that he belonged, winning twice on tour and blazing a trail for future generations of athletes in America. I was honored to award Charlie the Presidential Medal of Freedom last year — for altering the course of the sport and the country he loved. Our thoughts and prayers are with his family, his friends, and his fans.â€

According to ESPN, Sifford won the Greater Hartford Open in 1967, the Los Angeles Open in 1969 and the 1975 Senior PGA Championship. In November, President Obama presented Sifford with the Presidential Medal of Freedom.