Prof. Marc Lamont Hill Claims In Debate That Men Can Get Pregnant 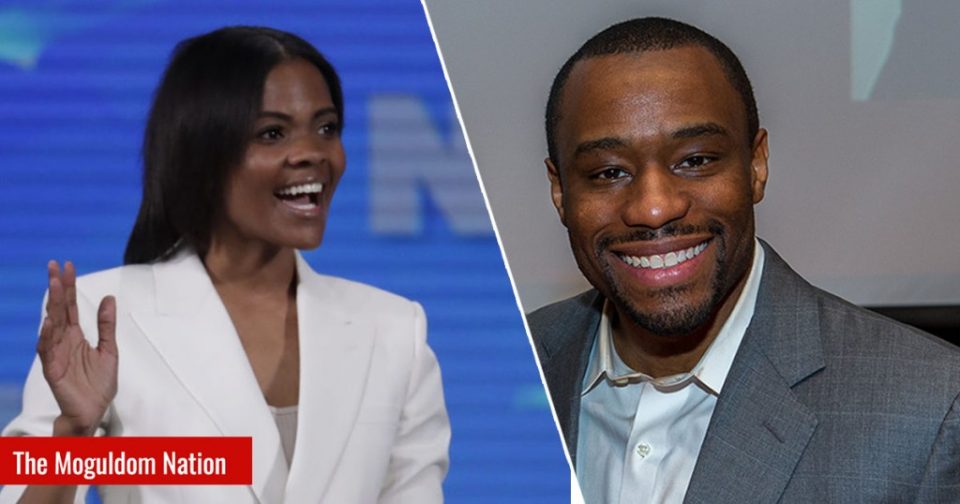 Wait. What. Whoa. Did Prof. Marc Lamont Hill just claim that men can get pregnant? Yes. To be specific, he said on conservative pundit Candace Owens’ online talk show that transgender men can indeed get pregnant.

Owens asked him on “The Candace Owens Show” if men can give birth, and Hill replied: “Sometimes. That’s my answer, yes.” Owens then asked, “Can men get their period?” To which Hill said, “Some can. If you’re a trans-man. Some trans-men can.”

The two, who are on opposite sides of the political landscape, were discussing the trans movement along with Black Lives Matter and race relations in America, among other things.

ScoonTV @ScoonTv tweeted: “Marc Lamont Hill said men can give birth when asked by Candace Owens. Anybody following me who agrees with him please unfollow now. Oh what a web we weave. He answered that question as if his life was on the line.”

ScoonTV@ScoonTv tweeted, “Marc Lamont Hill said men can give birth when asked by Candace Owens. Anybody following me who agrees with him please unfollow now. Oh what a web we weave. He answered that question as if his life was on the line.”

TheHandsomeconservative @EddyGriffin tweeted, “The fact that people actually believe men can get pregnant is mindblowing I stand with Candice on this one & if you don’t also you’re delusional.”

But others sided with Hill.

mel @memegodmel tweeted, “it costs 0 dollars to not be transphobic. even if u don’t agree, it’s not like the logic is faulty. A FTM trans person can menstruate and they are still a man. whether you agree or not is on you, but u a grown ass man in 2020 acting like this is rocket science.”

Seems Hill is not exactly wrong. According to transgender men, they can sometimes give birth. Jay Thomas and his wife, Jamie Brewster, are both transgender. Thomas gave birth to the couple’s son Dorian, now 2, and they spoke with NBC News about the experience.

Thomas, a cook in Louisville, Kentucky, explained to his doctor that he and his wife, Jamie Brewster, 33, a bank employee, are both transgender. When Thomas, who was born a female but was now a transgender man, wanted to give birth to the couple’s children, his doctor thought it would be difficult as Thomas had been on hormones to increase testosterone for his gender transitioning process. But within three months of trying to conceive, Thomas was pregnant.

“One of the most persistent myths transgender men and nonbinary people hear from doctors is that testosterone has sterilized them, experts say. While testosterone generally blocks ovulation, trans men can get pregnant while taking it, particularly if they are not taking it regularly,” NBC News reported.

According to GLAAD, “Transgender is a term used to describe people whose gender identity differs from the sex they were assigned at birth…People in the transgender community may describe themselves using one (or more) of a wide variety of terms, including (but not limited to) transgender, transsexual, and non-binary. Always use the term used by the person.”

In order to more fully be aligned with the gender they most identify with, “most transgender people seek to bring their bodies into alignment with their gender identity. This is called transition.”

Dr. Hill is an academic, author, activist, and TV personality. He is a professor of media studies and urban education at Temple University. He had been the host of the syndicated TV show “Our World with Black Enterprise,” the internet-based HuffPost Live, and BET News. He is also a former political commentator for CNN and Fox News. Hill was fired in 2018 from CNN after remarks before the U.N. on the Arab–Israeli conflict that were perceived as anti-Semitic. Hill has received numerous awards from the National Association of Black Journalists, GLAAD, and the International Academy of Digital Arts and Sciences.

Owens is a conservative commentator and a spokeswoman for Turning Point USA. She started Blexit, an effort to get Black voters to leave the Democratic Party. She previously co-founded the website Degree180, according to Politifact.