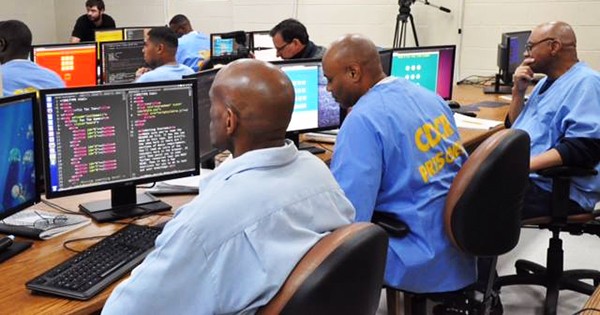 The Last Mile, a prison rehabilitation program based in San Quentin, California, offers prisoners free training on how to code. This equips them with the training they need to get a job more easily once they are out of prison.

“At The Last Mile, we are using technology to try and solve mass incarceration,” Jason Jones, a software engineer who teaches computer coding to prisoners through remote communication, told The Denver Channel.

Those who finished the program, once released from prison, will be connected with tech companies such as Slack, Facebook, and even Google.

Jones himself was a product of the program. He belongs to the almost 100 graduates, who had a zero recidivism rate, compared to the 83 percent recidivism rate in the whole country.

“You are talking about disrupting the status quo of people not normally getting access and opportunity,” said Jones. “Not only are we driving down the recidivism rate where people get out and don’t come back no more, but we also have the ability to go back in the community and stop people from going into prison in the first place.”

The Last Mile, founded by Chris Redlitz and his wife Beverly Parenti, was launched 10 years ago. Since then, hundreds of incarcerated people have been taking on the program, benefitting from their potential life transformation.

“What The Last Mile has shown is that a change is possible,” Parenti said.

More than that, The Last Mile intends to relieve the financial burden spent on the prison. The estimated cost to house a prisoner in California is about $75,000 a year, but it only costs about $5,000 for a prisoner to go through the program. Truly, it has resulted in millions of savings on tax.

At first, the budget for the program came from Redlitz and Parenti only. Now, they have gained support from corporate partnerships and state funding. The program which started in one prison in California has now expanded to five states and their reach continues to grow.

“Generally, many people inside want to do better, want to second, want to be successful,” said Redlitz. “So, create that opportunity, because 90 percent of people are going to get out, the question is, ‘who do you want them to be?’”

This article was originally written by BlackNews.com.