Promoting the Mental Health Needs of College Students of Color 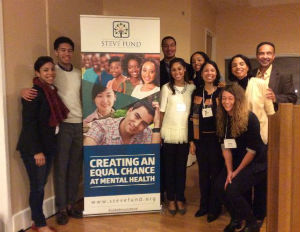 The Steve Fund supports the mental health and emotional well-being of students of color. It was founded two years after the death of Stephen Rose, a Harvard alumnus who, at age 29, took his own life.

After Steve’s death, the Rose family marshaled its grief and created the Fund to address issues such as stigma and fear, as well as the lack of access to mental health services in communities of color.

“We didn’t want any other family to go through what we’d been through,â€ says Evan Rose, president of the Fund and one of Steve’s brothers.

The organization is working to accomplish four main goals–to build knowledge and thought leadership; create programs and strategic partnerships; promote awareness and dialogue; and produce technological innovation–as well as review current research, and conduct surveys to learn the most effective means of meeting the mental health needs of students of color.

In the mental health field, is there a need for such a narrow focus? Yes, says Alfiee M. Breland-Noble, Ph.D., senior adviser and health disparities researcher who counsels the Fund on the science related to the mental health of students and other young people of color.

While anxiety and depression are prevalent among all groups, access to care is starkly different across races and ethnicities. “But the problem of access is less about not having insurance or money, and more about the psycho-social barriers that prevent people of color from seeking care,â€ says Breland-Noble, also an associate professor of psychiatry at the Georgetown University Medical Center, and director of The AAKOMA (African American Knowledge Optimized for Mindfully-Healthy Adolescents) Project.

Breland-Noble says, “We need to raise awareness of what mental health looks like. Mental health is a spectrum–it’s not either you’re mentally healthy or you’re not.â€

A romantic breakup, for example, may seem trivial, but it can be devastating for some young people and lead to depressive symptoms that require treatment, says Breland-Noble. “It’s critically important for families of color to acknowledge that mental health concerns … absolutely do impact us as people of color.â€ With that understanding, she says, it makes sense for families to research what mental health resources are available on their child’s campus or in the surrounding area.

For people of color, the best resources are culturally competent. This is key, Breland-Noble says. “That means that, at a very basic level, a person has an awareness of how race, culture, and ethnicity operate in the United States.â€

For more information about the Steve Fund, visit its website.