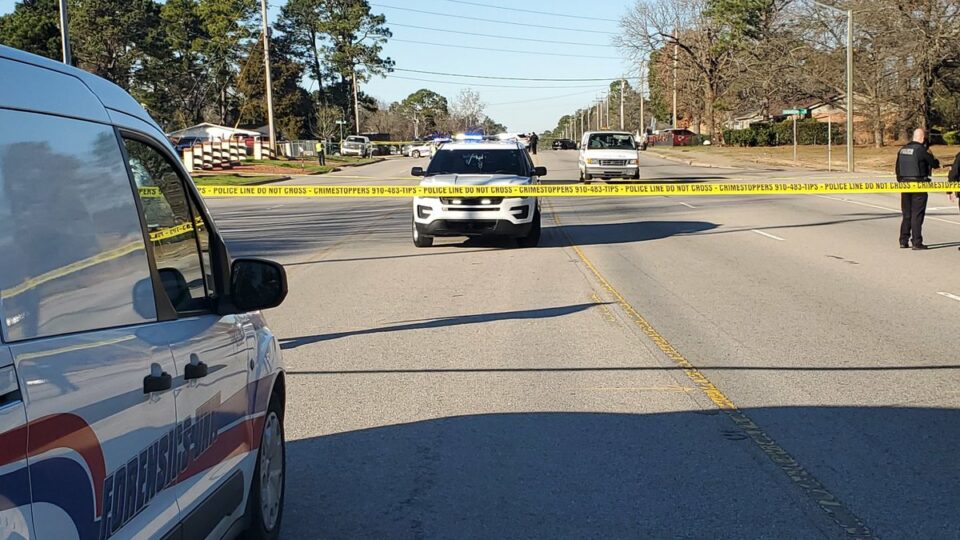 The fatal shooting of a Black man by an off-duty deputy in Fayetteville, North Carolina, sparked protests on Sunday, as activists rallied outside the police station to dispute and question police accounts of the incident.

Jason Walker, 37, was struck by the truck of an off-duty Cumberland County sheriff’s deputy on Saturday along Bingham Drive, according to a Fayetteville Police Department news release, The News & Observer reported.

The initial investigation determined that Walker “ran into traffic and jumped on a moving vehicle,” and the unidentified deputy subsequently shot him and then called 911, police said.

Walker was pronounced dead at the scene.

The group of protesters disputed the accounts given by the police, including witnesses who claim the deputy hit Walker as he was crossing the street and then shot him.

Elizabeth Ricks, who said she witnessed the incident, is a trauma nurse who jumped into action and applied pressure to Walker’s wound after she saw the events unfold. She confirmed that she saw Walker’s attempt to cross the street when he was struck by the deputy’s truck and then shot by him.

“I did not see anyone in distress. The man was just walking home,” said Ricks.

Police Chief Gina Hawkins said during a news conference Sunday that investigators examined the vehicle’s “black box computer, which logs speed, braking impact and other events.” However, the computer did not record anything of impact.

A bystander video of the shooting’s aftermath shows that the off-duty deputy had been driving a red truck that wasn’t a law enforcement vehicle, which Hawkins has reportedly seen. She said the only person at the scene who indicated they witnessed what happened said Walker was not struck by the truck.

While the North Carolina State Bureau of Investigation has taken over the investigation, they noted that a windshield wiper was torn off the truck and the metal portion was used to break the windshield in several places. However, there is no footage of the incident itself.

“We would like to hear from anyone who saw what happened,” Hawkins said. “We’re here for anyone who has evidence, video or even a person who was there beforehand at any point to come and provide statements to the SBI.”

Hawkins said police took the deputy into custody, but he was not arrested. His firearm was seized.

“It breaks my heart he didn’t survive, and I’m trying to cope with that as well,” said Ricks at Sunday’s march. “I don’t want to take away from Jason or the injustice, and I’m not going to be silent.”

WRAL News spoke with Walker’s family, all devastated by the news and the police accounts that describe Walker.

“I was sad. That’s my best friend. We were really close,” said his cousin Brittany Monroe. “It really broke my heart because he would never hurt anyone. I don’t understand how it could happen to him. He would do anything for anybody.”

“We’re hearing one side of the story that sounds like a person that Jason is not, and then on the other side, we’re hearing a story that makes complete sense,” another cousin said. “We have to take it one day at a time. Hopefully, the system does what’s right and gets to the bottom of this. We really just want justice for Jason.”