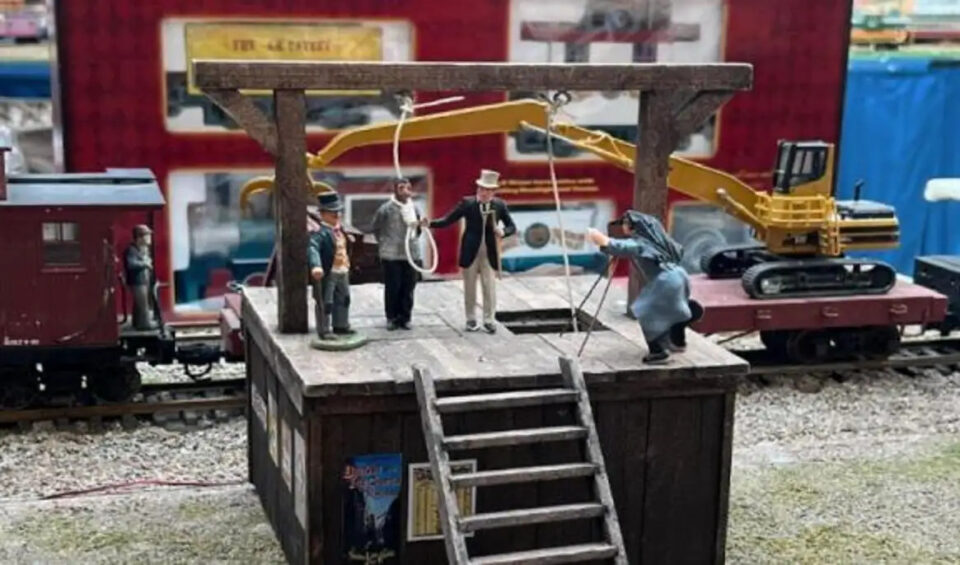 Protesters joined the Las Vegas chapter of the National Action Network on Monday to demand answers for a racist railroad display that had been in the Galleria at Sunset mall.

The train display, presented by the Las Vegas Garden Railway Society, was up from May 30 until July 5, when it was pulled down following public outrage and complaints of racism, KLAS reported. It featured a long, 3-D display of different railroad scenes, including three white people surrounding a Black man on a scaffold with a noose around his neck. One white man held the noose in his hand to seemingly prepare a lynching.

The National Action Network released a statement saying, “community members are outraged that a racist train display showing a Black man being prepared to be hung was tolerated and allowed at the mall for hundreds of children, families & community members to see,” per the news outlet.

“I’m saddened that we are here again protesting things that we thought were over with — a lynching display,” said Bishop Bill McDonnell with the Wealthy Place Church.

Protestors not only called for a public apology, but also for the railway society to participate in cultural sensitivity training.

However, the president of the Las Vegas Garden Railway Society, Sue Jerrems told KSNV that she felt the training wouldn’t be necessary because the members “didn’t mean any harm” and that they “never meant to offend anybody.”

Jerrems apologized for the display, claiming that the same train display had been previously put up at the mall a few years back and received no complaints at the time, according to the Las Vegas Sun.

“We never looked at it as a Black man before,” Jerrems told the Las Vegas outlet. “It was just part of a frontier scene. It had no racist implications. Once someone pointed out the implications of it, we took it down. We apologized.”

She added: “We’re just a small volunteer group,” Jerrems said. “We play with trains. We had no intention of offending anybody.”

Nevada Governor Steve Sisolak tweeted about the display Monday, writing, “Racism has no home here in Nevada. This is completely unacceptable and our community deserves answers.”