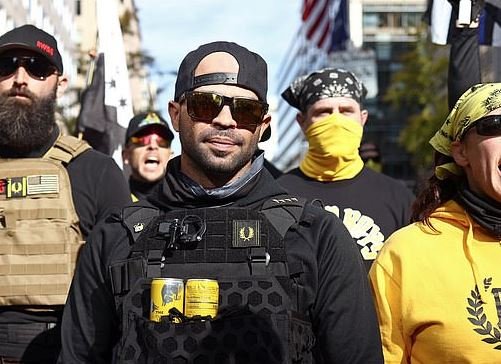 With racial unrest taking place across the United States amid the social justice movements, The Proud Boys have risen among hate groups wreaking havoc. According to CNN, the leader of Proud Boys, Enrique Tarrio, was arrested in Washington, D.C., on Jan. 4.

In December 2020, BLACK ENTERPRISE reported that Black Lives Matter signs outside of several historic Black churches in Washington D.C. were burned and destroyed during a pro-Trump rally. When Tarrio appeared on a “WarBoys” podcast interview that month, he took responsibility and stated he was “the person that went ahead and put the lighter to it and engulfed it in flames. “I’m damn proud I did,” he said.

An official from the D.C. Metropolitan Police Department, Public Information Officer Sean Hickman, stated that Tarrio, who hails from Miami, was charged with destruction of property related to a banner being burned on December 12, outside a Black church in northwest D.C.
“He was charged with Destruction of Property related to an offense that occurred on Saturday, December 12, 2020 in the 900 block of 11th Street, Northwest,” Hickman said. “At the time of his arrest, he was found to be in possession of two high capacity firearm magazines. He was additionally charged with Possession of High Capacity Feeding Device.”
CBS News reports that Tarrio had stated that The Proud Boys were reacting to four members of The Proud Boys being stabbed outside a nearby bar near Asbury United Methodist Church. The church replaced the banner on December 18.
Another Black church, Metropolitan African Methodist Episcopal Church, also had a Black Lives Matter sign taken as well. They’ve recently filed a lawsuit against Tarrio for the destruction of the banner on Jan. 4.