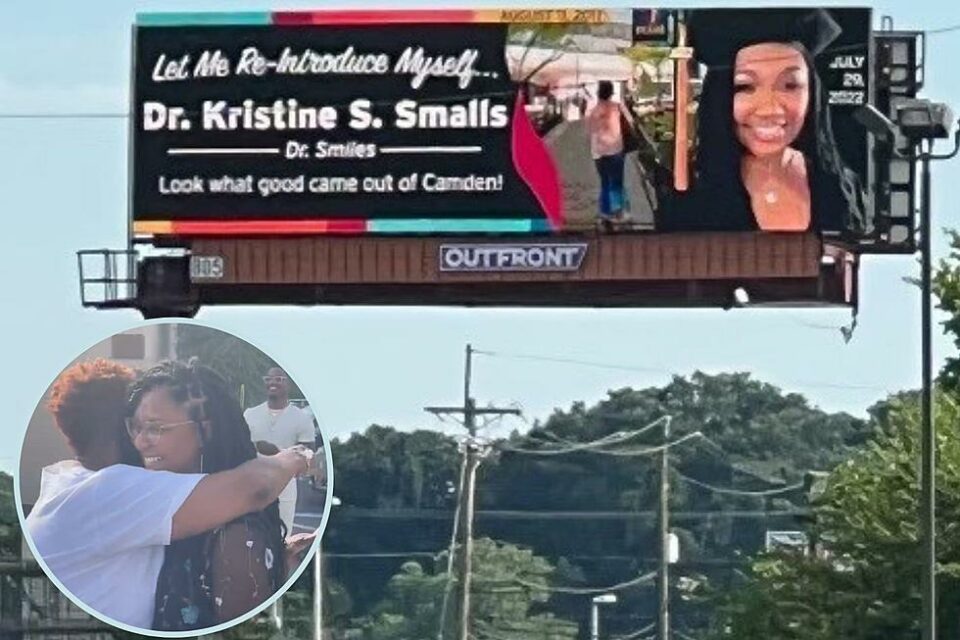 A mother’s joy prompted her to display it in a billboard towering 14 feet high and 48 feet across for those near and wide to celebrate too.

“Let me Re-Introduce Myself …” the billboard starts.

Kendra Busbee of Cramer Hill, East Camden, is the proud mama of Kristine Smalls, who recently earned her doctorate degree.

“Every accomplishment that they make, it needs to be heard,” Busbee said, per the Philadelphia Inquirer. “For our Black and our brown children, letting them know that anything is possible.”

“We want to start from positivity,” added Busbee, who worked two jobs throughout her daughter’s childhood. “Every other child that may ride by the billboard, who else will it touch, and who else will it inspire by seeing my daughter and her Black girl magic?”

Using $1,250, the 52-year-old matriarch and children’s mobile response worker rented the banner for a month, the newspaper reported. Then she planned a surprise gathering of family and friends in the parking lot for an unveiling outside a pub, near to the billboard. Smalls was convinced that everyone was outside due to COVID-19 protocols until she saw the colossal billboard adorned with her photo. She was stunned.

“She [Busbee] typically goes above and beyond for me and my brother whenever we, like, have any type of accomplishment,” Smalls said. “She kind of outdoes herself each time.”

The billboard ends with: “Look what good came out of Camden!” Just outside her hometown of Camden, New Jersey, the digital version of Smalls is displayed for all to see above the active Route 130.

Born and raised in Cramer Hill, East Camden, Smalls has had big dreams from as early as four years old, according to her mother. She attended Cooper’s Poynt for elementary school, Sacred Heart for middle school, and Dr. Charles E. Brimm Medical Arts High School.

Crowned middle school valedictorian, the young scholar turned down a full scholarship at Camden Catholic High to fully embrace the culture that is Cramer Hill and the Parkside neighborhoods. Instead, she opted for a local public high school. She continued on to earn a bachelor’s degree from Kean University and a master’s from Rowan University with an educational specialist certification.

Smalls took her passion to the district schools as a staff psychologist before leaving to complete a practicum and internship for her doctorate program.

Smalls’ pursuit for a career in clinical psychology was not only her way of helping to break the stigma of Camden once being labeled the “most dangerous” city in America, but to help struggling youngsters cope.

“This is the change that the city needs to see,” Smalls said. “There is more to Camden than just the violence. Great things come out of Camden.”

To date, Smalls rides by her billboard every day, igniting in her to go after the next big goal—a private practice that serves as a resource center in Camden for mental health services, reentry support, and family events that would motivate young people away from the streets.