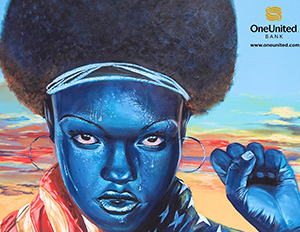 #BankBlack fever is sweeping the county. This movement is aimed at empowering the black community by taking control of its wealth and investing it into the community through one of the 21 black-owned banks in the U.S. It got national attention on July 8, 2016 when rapper Killer Mike implored the black community to deploy a portion of its financial resources to make a tangible difference, during a town hall meeting on BET and MTV.

In Atlanta alone, there are reports that, at Citizens Trust, 8,000 people took the challenge, bringing in about $800,000 in deposits to the institution in five days. Celebrities, such as Solange, Jessie Williams, Alicia Keys, Beyonce, Queen Latifah, Usher, and more, have joined the conversation urging black Americans to move their money to black-owned banks.

OneUnited Bank, the largest of the black banks that’s also a Community Development Financial Institution (CDFI) and the first black Internet bank, is joining forces with #BlackMoneyMattersLA. On Saturday, July 23, 2016, the bank is hosting a first-time account opening event at its Crenshaw branch in Los Angeles.

“With over 1,000 people expected to attend, the event is planned as a positive and exciting opportunity for Los Angeles’ urban community to participate in the nationwide push to #BankBlack. The event will feature food trucks, free giveaways, a personal meet-and-greet with the owners of OneUnited Bank,” says OneUnited.

Black Enterprise caught up with Teri Williams, President and a member of the Board of Directors for OneUnited Bank. Williams shared her insights about the power and purpose of the movement.

Black Enterprise: What is the goal of the #BankBlack initiative?

Teri Williams: To demonstrate the power of the black dollar and increase community awareness of the need to recycle dollars within our community, by banking with black-owned banks–like OneUnited Bank–and buying from black businesses. As Black Enterprise has previously stated, black businesses are more likely to hire black people. The solution to the high unemployment and income inequality in the black community must include the development of black businesses and increased home ownership.

To participate in the #BankBlack Challenge from anywhere in America, go to www.oneunited.com/bankblackchallenge, open a $100 new savings account, and challenge 20 friends to do the same.