Publicity For Your Small Business: 4 Tips to Get Local TV Coverage 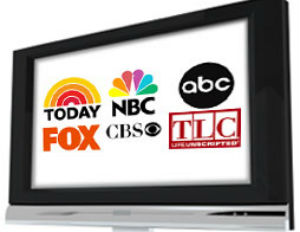 If you are opening a small business, one of the best and quickest ways to get the word out about your new venture is to get on your local television stations. If you can get your business on television, you have the opportunity to reach a large local audience and gain critical exposure that could lead to foot traffic, web traffic or both.

But getting television crews to come out to your business can be tricky as competition is fierce! News desks receive dozens of event notices and advisories every day. So how do you get yours to stand out? And how do you make the most of television coverage if you do receive it?

1. Leverage audience numbers: Create an experience that will attract many people from the city, and guarantee an audience by requiring an event sign up page or RSVP that will enable you to know how many people you are expecting. If you can sell the fact that 10,000 people will be at your event, news crews will be more likely to show up because they will want to be where they can get good TV footage, i.e. large crowds, many people to interview on camera and “a scene.”

2. Communicate clearly with the news station: You need to reach out to the local news station at least two weeks before your event – three weeks if you have never reached out to them before. Call the station ahead of time to get the name, phone number and email address of the person who plans segments or schedules the camera crews so that you can send your media advisory to the right person. Then send your advisory at least two weeks in advance. Make sure that you include when the best (and most visual) time to send a camera (ribbon cutting at 2pm? opening remarks at 11am?) is, as well as your mobile phone number so that you can be reached at all times. After sending your advisory, follow up by phone to make sure it was received, then check back in the week of your event, the day before your event and the morning of your event to find out if you should be expecting the station to come out (and to make sure your media advisory made it on the station’s day book).

3. Follow Up!: If a news crew came out to your event, congratulations! But your work doesn’t end there. Once you see the news segment online, be sure to tweet the link and share it with your friends, Facebook followers and other networks. Follow up with the producer who made it happen with a note of thanks. Send any follow up information that could be used in a follow-up story. For example, if you had a charity tie-in, how much money did you raise?

4. Capture Your Own Footage: Sometimes, you will have a very interested producer who wants to cover your event, but there’s breaking news that prohibits them from being able to come out. In that case, be sure to grab some good b-roll video of your own, as well as any good video of key moments during your event. In a best case scenario, the producer will be able to use your footage to put together a quick post-event spot. Worst case, you’ll have great footage to put on your company’s YouTube channel. So really, it’s a win win!