She Made the Uber of Home-Cooked Food 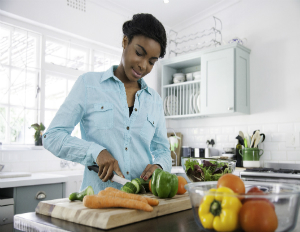 If you could use an app to find home-cooked meals nearby and have that food delivered, would you do so?

Camille Baker is betting you would. She is the developer and founder of Pull-Up-A-Seat: think of it as the Uber of home-cooked meals, currently available in the App Store.

Baker describes the app as, “A private community marketplace that allows anyone to sell home cooking on-demand to any and everyone.â€

Some use-case scenarios for Pull-Up-A-Seat:

Those preparing and sharing meals can charge and keep 100% of the money they make. Baker’s company makes revenue through transactions and in-app ads.

The 24-year-old recently graduated Florida A&M with a degree in business. Although she isn’t a computer science or engineering major, she coded the app herself. “I went to preparatory school. They taught us [computer] languages, but I took it a step further. Being a black girl in an all-white school, I found a lot of the community online, and people who were into hacking and coding.â€

Recently, Baker was accepted into an accelerator called eFactory. The accelerator is helping her take her business to the next level, and it even supplied her with additional funding. She was actually accepted into a number of accelerators with her app, but eFactory “offered the most money, with [taking] the least amount of equity,â€ she explains.

Baker’s goal is to provide “on-demand home cooking for anyone by anyone.â€ Since launching in August, she has already seen clever uses. “We saw a sorority using it to do a food drive. People who couldn’t stop by were buying through the app.â€

About potential trouble, such as less-than hygienic home cooks or someone receiving tainted food, Baker credits her parents for insisting she hire a lawyer as well as utilize an intense vetting process for food preparers–or “hosts,” as they are called in the app. “When you sign up, you can sign up as a foodie or a host,â€ she says. “Hosts go through background checks–someone actually goes to the home and checks it out.â€

Additionally, hosts can build their portfolios within the app, showing past food they have made. As with many services of this category, hosts are subject to the community’s ratings and reviews, with those with the best ratings being sought the most.

Baker says, at the accelerator, she was advised to make sure anything concerning liability or insurance issues was “airtight.â€

Currently, the app only caters to the Florida area, but Baker is very focused on building an active user base. Eventually, she hopes to offer some kind of subscription model, “but nothing to drive away current or new customers,â€ says the business major.