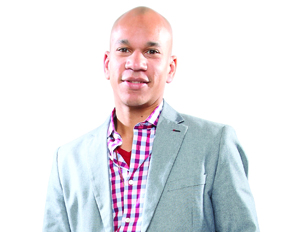 Rob McConnell is the manager of exterior and lighting development as part of the design team at the Toyota Technical Center in Michigan. He played a significant role in the design of the Avalon. Now, the African American automotive designer he is lending his talents to designing Toyota vehicles that are future forward; those built with high-tech features including autonomous driving and integration with mobile devices.

Black Enterprise interviewed McConnell  about his career in the  automotive industry. McConnell has a mechanical engineering degree and has been with Toyota for 18 years.

Black Enterprise: How did you end up designing cars? What’s your background?

McConnell: I didn’t know I wanted to work in the auto industry until college. I’m originally from Lansing, Michigan. I started working at Toyota out of college. The things you do as a child [that] you are interested in influences your career choice. I liked to build: Lincoln Logs; Hot Wheels.

How much crossover is there between designing and engineering with auto design? Is what you do more art or science?

It’s a collaboration of both. We have a very deep and detailed interactive relationship between the designer element and engineering in the styling and design of the vehicle.

How is Toyota differentiating itself from other automakers in design?

Really, what’s critical to us is understanding the voice of the customer, paying attention to that detail, and then infusing that into our development and design.

We still see so few people of color in the boardrooms of auto companies and owning car dealerships. What does the industry need to do to further diversity efforts?

STEM is a great vehicle. I think it really starts with being proactive as opposed to reactive. In Toyota, in other OEMs, [you] really have to go out and showcase that the opportunity exists. What I try to do to move forward is going out and showcasing the visibility and the opportunity that exists for minorities and people of diverse backgrounds. Engineering is possible; engineering in the automotive industry is possible; success in that is possible.

Our president showcases the opportunities that now exist. You can have a deeper tone to your skin and be president of the country, which is something that is greatly exciting and that trickles all the way down to manufacturing, automotive manufacturing, production, and development.

So there’s great opportunity. It’s our job to expose that.