How a Young Woman Got the Ultimate Career Win 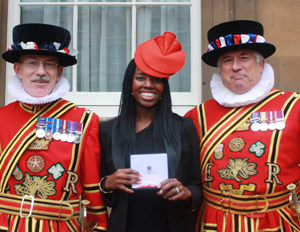 Have you ever been on the receiving end of an unexpected phone call from someone very important, bearing news you could never possibly have imagined?

When I received a call from the British Prime Minister’s cabinet office to tell me that I had been nominated to receive an award from Queen Ellizabeth II, my first thought was “This has to be a prank.â€

Twice a year, the Queen bestows honors to individuals across the United Kingdom. Dating back 650 years, the British honors system recognizes outstanding achievement and service to society. And this year, I was one of the recipients. As a result of my work at the Twenty Ten Club, I have been appointed a Member of the Order of the British Empire (MBE).

Back in 2010, I wanted to showcase the achievements of black female entrepreneurs I admired, so I started the Twenty Ten Club. My goal was to connect inspiring Black women in business and share their stories so that young women of color could access real-life role models.

Fast forward two years: We are now an award-winning organization that hosts business development events for black businesswomen and workshops designed to inspire the teenagers who will follow in our footsteps.

Arriving at Buckingham Palace and entering the ornate ballroom for the investiture ceremony was a nerve-wracking experience. There are certain formalities, as protocol dictates you cannot turn your back. When my name was called, I had to curtsey, walk forward, greet His Royal Highness the Prince of Wales, walk backward, and then curtsey again.

Prince Charles has a charity, The Prince’s Trust, that provides money and support to help young people start up businesses. We are very proud to have Prince’s Trust Ambassadors within the Twenty Ten Club membership, and when I told Prince Charles, he was delighted.

Receiving the award is truly an honor but the real privilege has been—and continues to be—the opportunity I have to connect with so many inspiring black businesswomen. My work at the Twenty Ten Club has introduced me to women who have changed my life, and I will be forever grateful.

If you had told me back when I was at school, that I’d be invited to Buckingham Palace to receive such an award, I’d never have believed it—not in a million years.Â  It just goes to show if you embark on a journey that matters—one you’re passionate about—it can take you heights you’ve never seen before.

Octavia Goredema, MBE is founder of the Twenty Ten Club , an award-winning, U.K.-based networking organization and resource designed to connect, inspire and support black female entrepreneurs. Named one of the UK’s Social Enterprises of the Year at the Future 100 awards, the Twenty Ten Club was a Leadership in the Community finalist at the 2011 Network of Aspiring Women Awards and a Best Business Blog finalist at the Black Weblog Awards in 2010—the only British site to reach the finals in the business category.