Disney's Queen of Katwe Is a Must-See 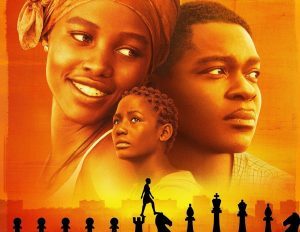 I saw it last weekend and can only say that the film has stayed with me all week.

Queen of Katwe tells the true story of Phiona Mutesi, one of Uganda’s top chess players competing in international competitions. After her father died, Phiona’s family slipped into poverty. Her family couldn’t afford school fees, so she and her school-aged siblings sold maize in the market instead of attending school.

Phiona and her brother find out about a chess group for children being held through a local mission. She shyly looks through the clapboards to see what’s going on inside. Robert Katende, a Ugandan engineer and missionary who is teaching the children, spies her and urges her to come in.

Phiona doesn’t smell good. She works hard and, perhaps, doesn’t have time to bathe–the children conspicuously notice the odor, and soon, she ends up in a fight. But Katende continues to share out the porridge he is providing for the children. He doesn’t punish her. He doesn’t throw her out. He doesn’t say she has ADD and needs medication. He doesn’t say, “This program is only for good children who smell good and have good manners.â€

“Oh, you’re a fighter?â€ Katende says. “Good. This is the place for fighters.â€

That scene may have never occurred in real life, but I love how from the beginning the film shows how Katende would not erect another barrier in this young girl’s life. Not her poverty. Not her odor. Not hunger. Not fighting.Â  This is about possibility, that scene seemed to say, to me.

Education Is the Way Out of Poverty

But, that is only the beginning. Phiona has a long way to go–she is illiterate, and her mother needs her. Her faith wavers–she wonders if God cares about her family, now that her father is dead. She is surrounded by poverty and the trappings that await vulnerable children, especially girls maturing into womanhood.

There are wrenching scenes, and you sit and wonder if you could have faith in God living in such lack. Yet, Katende sees possibility in Phiona and is a steadying influence and guide. Thankfully his wife shares his vision and understands the true calling of his life is not one of a high-earning engineer, but of a kind father figure to the many needy children of Kampala’s poor areas.

Just go see this movie. I loved seeing Uganda’s class differences; wealthy, well-educated Ugandans, African humor and persistent hope, and the gold prize: an education for Phiona and her brother.

To learn more about the work of Robert Katende and to donate, visit this website. Watch the trailer for Queen of Katwe, below.