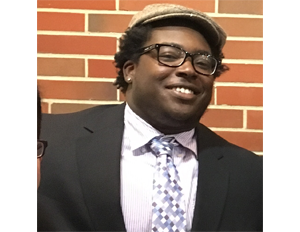 The National Institutes of Health has three-quarters of a billion dollars to give away to fund tech startups and research. Sadly, minority healthcare solution developers and researchers are not taking advantage of that money. And the few who do so are likely to be passed over for grant awards.

Kaleb J. Hill is determined to change that with an innovative app for monitoring glucose. He also plans to mentor others in acquiring NIH grants.

“This app will revolutionize the way diabetes is measured using a noninvasive, wearable device,â€ says Hill.

An aspiring registered nurse and biomedical engineer, Hill is the owner of FitnessFleet Inc., a biomedical health and informatics company focused on addressing healthcare issues in minority communities. He created an app that works with a specific wearable device–the Juxtopia Imhotep band. The band is used with Hill’s software, the FitnessFleet Sekhmet App, for painless glucose monitoring.

The device manufacturer is in partnership with Hill, Juxtopia Urban Innovation and Cooperative Entrepreneur (JUICE) Network– a non-profit organization which strives to increase the number of high-tech, high-growth minority companies. The ultimate goal is to contribute to the success of these companies so they can increase the number of high-paying jobs in the states in which these companies are based.

Other partners include HBCUs, such as Xavier University of Louisiana to assist with the research and development.

JUICE guided Hill on writing an NIH Small Business Innovation Research (SBIR) grant proposal. He has yet to receive a grant, but his solution generated interest from the NIH. He is planning to resubmit his proposal in January.

In the meantime, Hill is mentoring other tech healthcare and biomedical entrepreneurs in pitching the NIH through a series of workshops.

“We are hosting the workshops to help raise awareness for SBIR funding and to raise capital for our software prototype.â€

Hill’s company is staying financially afloat through help from his partners and he also does healthcare consulting to pay his assistant until he can secure an SBIR grant.