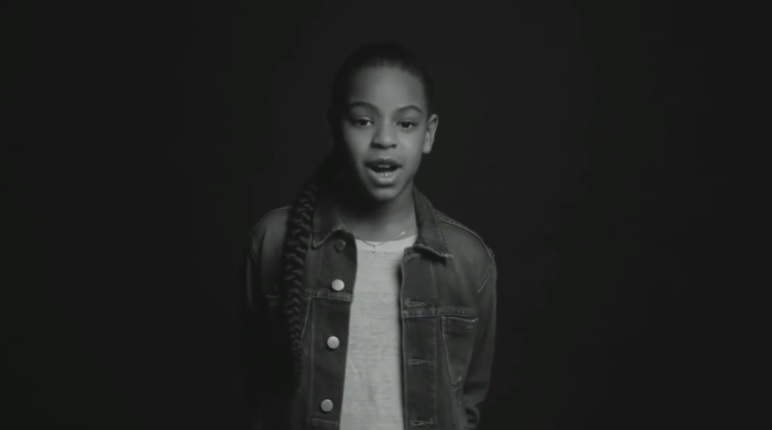 The intro video, which was shared following a pre-recorded video by President Barack Obama, finds each of the featured celebs delivering a direct quote or play on a verse from Jay-Z’s vast discography, which includes 12 solo albums and seven collaborative projects. The lyrics were adapted by rapper and songwriter Donnie “Mad Skillz” Lewis.

Making another scene-stealing cameo, Jay-Z and Beyoncé’s eldest Blue Ivy closes out the introduction with an interpolation of a line from the song “Ride Or Die.”

“Congrats, S. Carter, ghostwriter. You paid the right price, so we just made your hits tighter,” she delivers before giggling out of frame.

During the live induction ceremony, which took place on Oct. 30, the in-venue cameras panned to Jay-Z as the video came to an end, finding the rapper looking visibly proud and surprised at his 9-year-old’s contribution to the intro package. He later took to Twitter to show his gratitude.

“Thank you to everyone in that video package,” he wrote, “I’m definitely gonna cry in the car.”

This year’s Rock and Roll Hall Of Fame Inductees also included Tina Turner, who was honored in the Performer Category along with Jay; Gil Scott-Heron, who was presented with the Early Influence Award; LL Cool J, who was one of three artists to receive the Musical Excellence Award; and music industry veteran Clarence Avant, who received the award named after Atlantic Records co-founder Ahmet Etergun.

The 2021 Rock and Roll Hall Of Fame Induction Ceremony is streaming on HBO Max/HBO on Demand, and is scheduled to air across the premium network’s channels several more times.