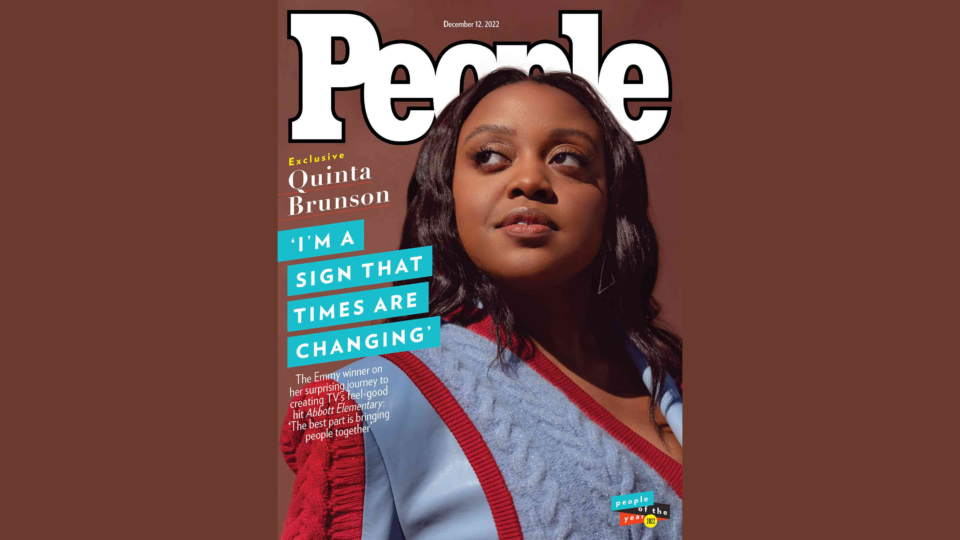 NEW YORK – Quinta Brunson joins Matthew McConaughey, Mila Kunis and Jennifer Hudson as one of PEOPLE’s 2022 People of the Year! Look for all four covers on newsstands this week and read more below from Brunson’s revealing interview in the new issue.

What a difference a year can make. In late 2021 Quinta Brunson was working on her passion project, a sitcom about a public school in Philadelphia. As its creator, writer, showrunner and star, she was eagerly anticipating the Dec. 7 premiere of Abbott Elementary on ABC. “I wanted to bring back the straightforward 22-minute workplace comedy,” says Brunson, 32, whose previous credits include roles on HBO’s A Black Lady Sketch Show and TBS’s Miracle Workers. The Philly native loosely based her Abbott character — hopelessly optimistic second-grade teacher Janine Teagues — on her mother, a former kindergarten teacher.

Abbott was an instant hit, logging more than 7 million total viewers and becoming ABC’s highest-rated comedy since the Modern Family finale. A season 2 renewal followed — Brunson even persuaded the network to redirect marketing money to buy school supplies for real teachers — and so did seven Emmy nominations and three wins, including outstanding writing for a comedy series for Brunson, making her the second Black woman to take that prize.

Looking back on what she has accomplished this year, Brunson, who has been married to Kevin Jay Anik since 2021, admits she’s playing with house money: “I just wanted to make a good show with good people, so everything else has been exciting additions to the plan.”

Look for all four covers on newsstands this week and read more from their revealing interviews in the new issue.

For FULL story, please click the link to PEOPLE: https://people.com/tv/quinta-brunson-people-of-the-year-2022/