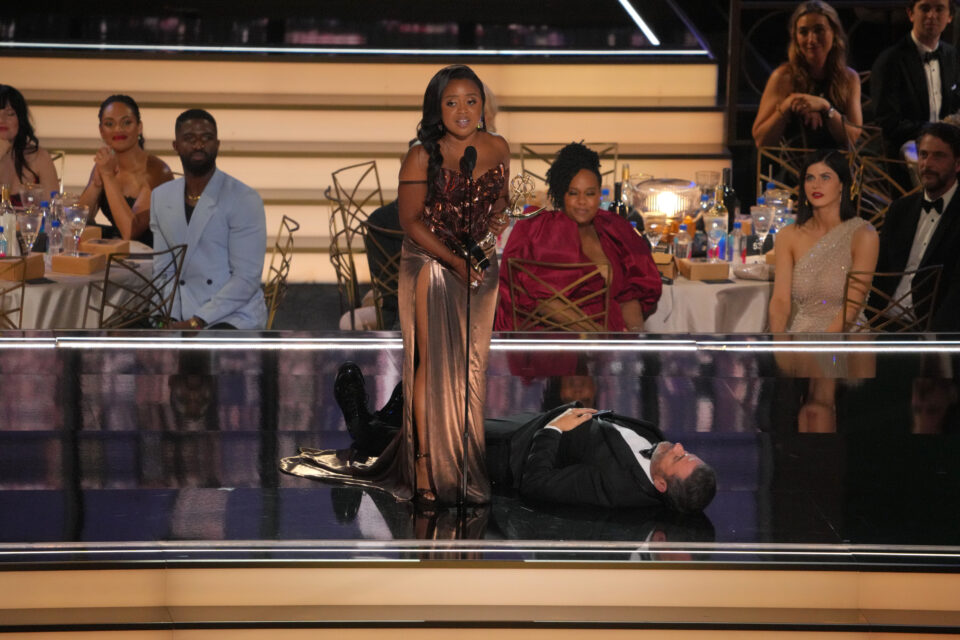 Stars who played a part in the “Abbott Elementary” series were racking up wins on Monday at the 2022 Emmy Awards, while this comedian was racking up backlash.

“Abbott Elementary” creator Quinta Brunson was awarded her first Emmy for Outstanding Writing for a Comedy Series, but the gag from late-night host Jimmy Kimmel was no laughing matter for viewers.

Kimmel and Will Arnett presented Brunson with her first win Monday night at the 2022 Emmy Awards ceremony. Correction: Arnett presented as Kimmel laid on the stage for a schtick that was in bad taste. Arnett dragged Kimmel on stage and jokingly reminded the audience of Kimmel losing in an earlier category.

As Kimmel laid in Brunson’s way, the disrespect was as palpable and as much a slap in the face to Brunson as the one Will Smith delivered to Chris Rock at the Oscars.

His excuse? Apparently, it was the “13th time in a row that he’s lost and he just got into the skinny margaritas back there,” Arnett said about Kimmel referring to his visit to the theater’s bar after losing.

The not-so-funny comedic bit was meant to be taken in jest as Kimmel throwing a fit because he lost. But in the process, he refused to let a Black woman have a winning moment all her own and instead did what most colonizers do — stole her magical moment.

When Arnett tried moving Kimmel out of the way as Brunson approached the stage to accept her award, good ole Jimmy Kimmel remained on the floor — in her way — throughout the duration of her speech as if he was passed out.

Limited with time, Brunson tried to play along — like Black women always have to do — and gave her thanks to the “Abbott Elementary” team, her Philly family, her momma and daddy who were surely watching, and her husband. She did it unbothered with the comedian still lying at her feet.

Backstage, Brunson told reporters, “I felt like the bit didn’t bother me that much.”

CNN reports the writer mentioned that Kimmel was an early supporter of her and “Abbott Elementary.”

Quinta Brunson addressed Jimmy Kimmel laying on stage during her #Emmys acceptance speech: "I felt like the bit didn’t bother me that much…Tomorrow maybe I’ll be mad at him. I’m going to be on his show on Wednesday, so I might punch him in the face." https://t.co/Bm8Bfhyi0k pic.twitter.com/cMDuZbq0AQ

Brunson also mentioned that she didn’t know what the internet would think about what took place. However, viewers already had comments rolling in expressing their thoughts about Kimmel’s disrespectful stunt and taking the spotlight away from a black woman during her moment.

White male privilege is laying on the ground & expecting a Black woman to just step around you while she accepts her hard-earned award. Fuck Jimmy Kimmel. #Emmys2022

A tweet from podcast host Sam Sanders read, “Kimmel playing dead on the ground right next to a black woman accepting her rightful place in the future of tv is such a stinging metaphor.”

Another Twitter user wrote, “I’m tired of Black women having to exert grace, maneuver around roadblocks, and share their spotlight for no reason.”
According to Page Six, Kimmel addressed the backlash after the show with Matt Cohen from Entertainment Tonight saying, “She is so unbelievably talented. And I saw her pilot before it came out on ABC, and I wrote to her, and I was like, ‘I don’t know how we got this, but congratulations. You made a pilot that any network would be ecstatic to get.” He continued to compliment Brunson with the words “She’s a lovely person as well.”
Reports mention that Brunson made history as the first Black woman to be nominated for three Emmys in the comedy category and the star will return with the anticipated second season of “Abbott Elementary” on September 21.