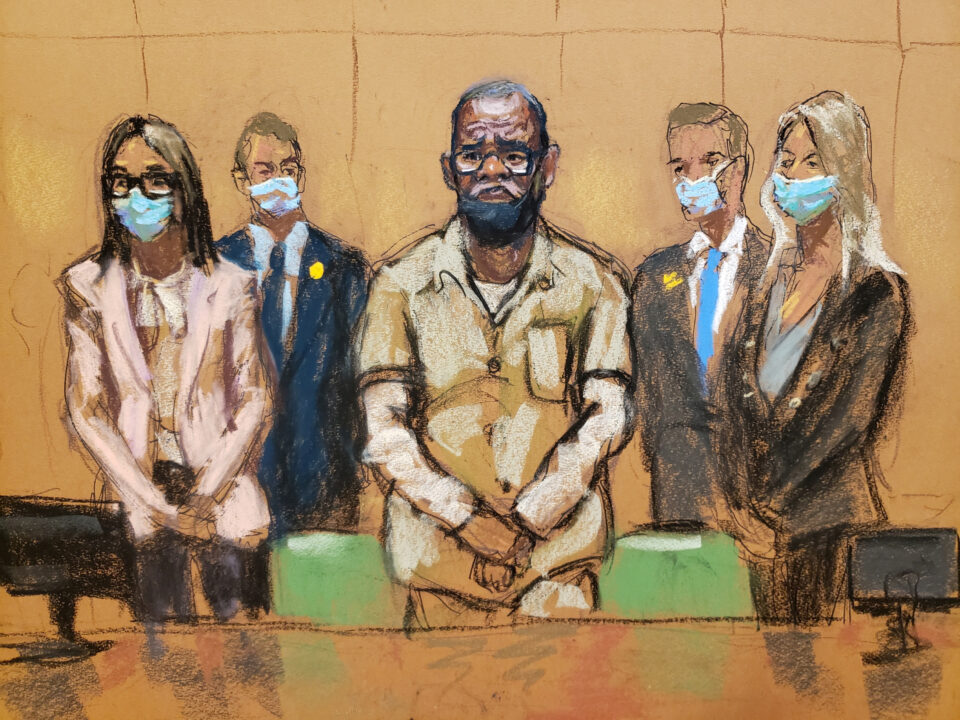 R. Kelly stands with his lawyers Jennifer Bonjean and Ashley Cohen during his sentencing hearing for federal sex trafficking at the Brooklyn Federal Courthouse in Brooklyn, New York, U.S., June 29, 2022 in this courtroom sketch. REUTERS/Jane Rosenberg

After a Chicago jury deliberated in court for approximately 10 hours, they decided to find R&B singer, R. Kelly guilty of child pornography and sex abuse charges.

Prosecutors claimed that Kelly engaged in sexual activities with five underaged girls in the late 1990s. He did videos with four of the victims.

During the trial, a woman, who was reportedly under the age of 18 at the time of the incident testified that she had hundreds of sexual encounters with Kelly when she was a minor. She initially lied 20 years ago to a grand jury about having sexual encounters with him from age 14 until 18. After prosecutors showed video clips of Kelly and her allegedly having sex, she admitted to the court that she was 14 at the time of the filming.

Kelly wasn’t the only one on trial facing charges. Derrel McDavid and Milton Brown, his co-defendants were both acquitted of the charges against them.

Kelly’s attorney, Jennifer Bonjean stated that the singer has a “sense of relief” now that this court case is over. She did say that she felt that the federal prosecutors had an overblown case against Kelly. They are considering filing an appeal. Bonjean, who was also Bill Cosby‘s attorney was successful in appealing the comedian’s sentence. He was freed due to her argument against his conviction.

She took to Twitter to state that her client is in “good spirits.”

Robert is in good spirits despite a mixed verdict. We won seven counts of this indictment (more than we lost) He is grateful for the support and the fight continues.

ABC News reports that Kelly is facing 10 to 90 years in prison. He has already been sentenced to 30 years in prison when he was convicted nearly a year ago in a Brooklyn, New York federal court of racketeering and violating the Mann Act, a sex trafficking law, which includes having sex with underage girls.

His legal troubles are far from over as he is facing two more trials. Those will take place in Minnesota and once again, his hometown of Chicago.