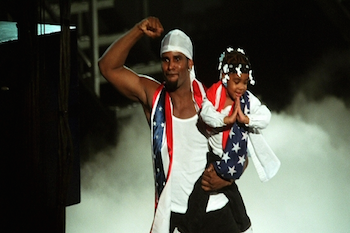 Chicago’s own R. Kelly was at his hometown radio station visiting Tony Sco and the “Morning Riot” when he spoke about his music, pleaded for Carmelo Anthony to join the Bulls, and touched on the rumors of his daughter becoming a transgender boy.

Earlier in June, Kelly’s 14-year-old daughter Jaya came out as a transgender boy and changed her name to Jay. While the rest of the world reacted to the irony that the Pied Piper‘s daughter would want to become a boy, the Chi-Town legend had been relatively silent on the news until his appearance on the morning show.

He didn’t really come off as a supportive father loving his child’s decision. Kelly was asked to address the “report of [his] daughter becoming [his] son,” yet responded very obtusely about the news.

“You don’t really wanna open it up by saying my daughter is becoming my son,” he told the morning radio crew. “Don’t even give the blogs that kind of credit. You know what I’m saying? Real talk.”

Previously, R. Kelly had said that there was some aggressive furniture moving going on. Without confirming or denying the news of his daughter becoming his son, R. Kelly has insinuated that this was a rumor not to be believed despite the fact that Jay (formerly Jaya) came out on his own— using his own words— via his Ask.fm account.

Kelly decided to change the conversation toward his finances while saying, “You save money so your kids can go to college—no matter what they are or who they are. They’re still your kids, you gotta support them.”