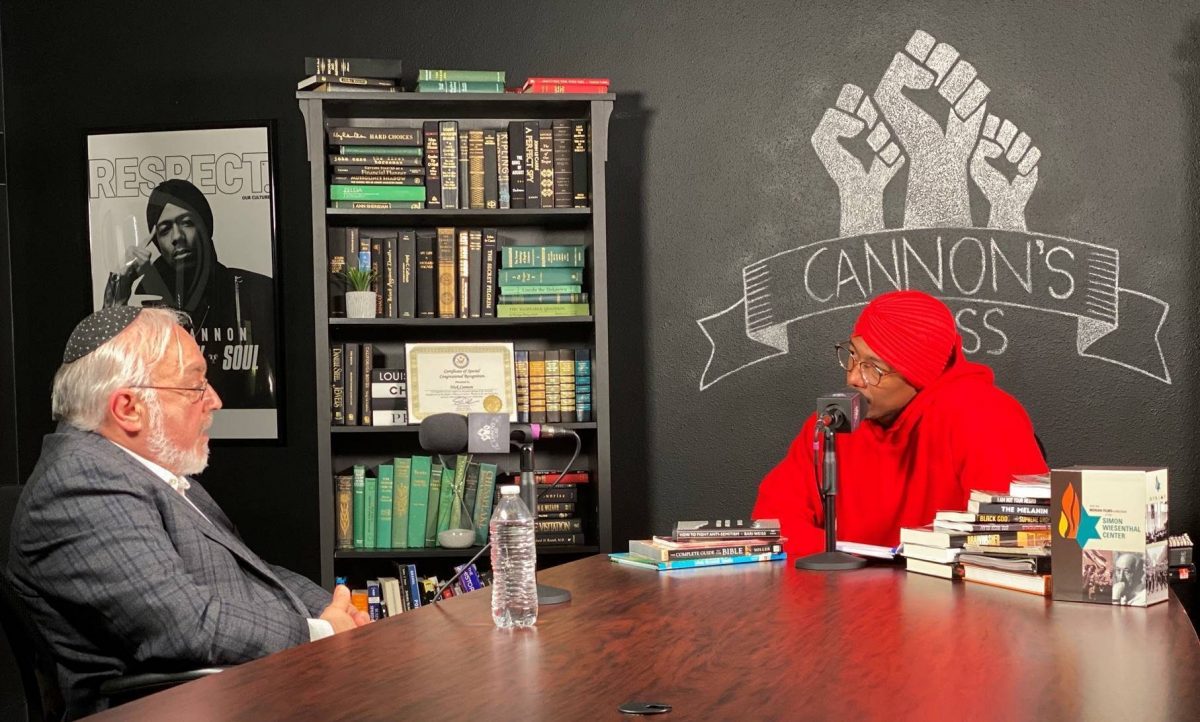 Rabbi Abraham Cooper and Nick Cannon during a conversation on Thursday, July 16, 2020, in Burbank, Calif. (Instagram/NickCannon)

Rabbi Abraham Cooper says he warned Nick Cannon about the backlash he would receive for apologizing for his use of anti-Semitic rhetoric — which cost him his job at ViacombCBS.

The 39-year-old entertainer came under fire last week for repeating anti-Semitic tropes during an interview with controversial hip hop figure Prof. Griff on his podcast “Cannon’s Class.” The host of The Masked Singer amplified Griff’s views that Jewish people controlled the media and perpetuated other anti-Semitic conspiracy theories. Cannon also claimed that Black people are the “true Hebrews,” saying, “it’s never hate speech. You can’t be anti-Semitic when we are the Semitic people.” He also added, “When we are the same people who they want to be. That’s our birthright,” reports BBC News.

After the podcast went viral, ViacomCBS ended its decades-long relationship with Nick and ousted him from his popular comedy franchise Wild ‘N Out on Vh1. Cannon initially responded by doubling down on his stance on Twitter and Facebook, writing “Viacom’s goal to keep me from providing for my family and lineage will be foiled,” reports The Washington Post. He went on to say the network cannot “kick me while I’m down or force me to kiss the master’s feet in public” and that it was trying to “hang me out to dry and make an example of anyone who says something they don’t agree with.”

Then, less than 24 hours later, the actor and comedian made a sharp pivot. After speaking with Rabbi Cooper, the associate dean and director of Global Social Action Agenda for the Simon Wiesenthal Center, Cannon issued a statement saying that he “feel[s] ashamed of the uninformed and naïve place his anti-Semitic comments came from.” He went on saying he extends his “deepest and most sincere apologies to my Jewish sisters and brothers for the hurtful and divisive words that came out of my mouth.” The statement came as a response to an announcement from Fox that he would not be fired from The Masked Singer.

The apology triggered a firestorm of criticism from people on social media who accused him of selling out. The Howard University grad, in response, shared cryptic posts on social media and later revealed that he was having suicidal thoughts due to the backlash.

I hurt an entire community and it pained me to my core, I thought it couldn’t get any worse. Then I watched my own community turn on me and call me a sell-out for apologizing. Goodnight. Enjoy Earth🙏🏾💙

Y’all can have this planet. I’m out!

When asked about their one-on-one discussion, which was later shared on the latest episode of “Cannon’s Class,” Cooper said the TV host showed no signs of despair. “The person I met is quite vital. He’s highly motivated,” Cooper told BLACK ENTERPRISE.

The clergy leader also revealed that Cannon reached out to his organization after he saw his tweet condemning Cannon’s discussion with Prof. Griff. “I sent out a tweet after watching the program,” he said. “My tweet was just real quick: ‘if you want a Ph.D. in hate, watch this YouTube (video).”

Before meeting with the Hollywood star, Cooper sent him a list of quotes from controversial leader the Honorable Minister Louis Farrakhan.  “We sent him in advance something we’d actually released about three weeks ago, quotes from Minister Farrakhan going back to the 1980s, about Jews, about gays, about Hollywood, etc. because I wanted the conversation to be substantive.”

Cooper says he also didn’t mince words about the pain he and may Jewish people felt after listening to the podcast.

“I said when I watched you say to me, ‘I’m not a Jew. I’m not the real Jew.’ I mean, that’s a trope that’s been around, unfortunately, for a very long time, often pushed by extremists in the Muslim world. That’s sort of the ultimate put down. Imagine if someone came to you and denied your blackness,” he recalled.

“By the end of the conversation, he said, “you know, I want to apologize to you.’ And I said, ‘honestly, don’t apologize to me. Every Jew feels that way. You put it out on the platform. Your job is to apologize to them.'”

Cooper also revealed that he forewarned Cannon of the recoil he would experience for apologizing, noting that NBA legend Kareem Abdul Jabbar was called a “Judas” and an “Uncle Tom” after he published an op-ed about antisemitism within the African American community.

“We forewarned him. I think he understood that whatever he was going to say, that it would go sideways,” he said. “That is the culture that about a million people around the world, most of the younger generations, have embraced.” He added, “the price tag for that is you almost never have time to reflect, to take a deep breath.”

Watch Rabbi Cooper’s full interview about his conversation with Cannon, the cultural tensions between the black and Jewish communities, and the intersectionality between Anti-Semitism and racism.