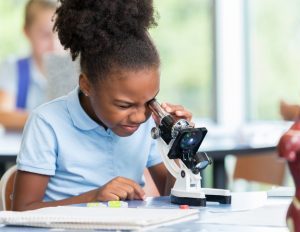 Marilyn Rhames is an award-winning blogger and the founder of Teachers Who Pray, a faith-based nonprofit with nearly 100 chapters nationwide.

Last week, Rhames sat on the panel Race, Social Justice and Education Reform, one of two such panels co-hosted by the American Enterprise Institute and the NewSchools Venture Fund.

After introducing herself as a native Chicagoan who grew up in poverty, attended public schools, went to Ivy League colleges, and whose three children attended traditional public schools, charter schools, and a private school, and who has spent the past 14 years as a teacher and counselor in Chicago’s public schools (Rhames has more qualifications to be Education Secretary than Betsy DeVos!) and previously worked as a journalist, Rhames went on to speak about the need for black and brown leadership in education reform.

Here’s an excerpt from her presentation.Â

It frustrates me that school reform for inner-city black and Latino childrenÂ isÂ andÂ always hasÂ been engineered by white, elitist (often paternalistic), upper-middle-class suburbanites who cling to a “theory of changeâ€ that intentionally minimizes my voice and the voices of other leaders of color.

It frustrates me when my white reform brothers and sisters call ed reform a “movement,â€ when, by definition, movements are led by the people who are most affected by the problem. Even the charter schools that grew out of this so-called movement have pushed black and brown educators out, opting for a whiter teaching corps than ever before.

It frustrates me when my white reform colleagues won’t acknowledge or downplay the effects of systemic racism, poverty, and trauma on a child’s ability to learn. These challenges are seen as “not relevantâ€ to the implementation of best-practice solutions used to teach white children. Instead, they simplify and narrow the menu of solutions to choice, accountability, and curriculum. Let me be clear: those three values are a vital part of the solution to this complex educational problem, but they are indeed onlyÂ a partÂ of the solution.

Why is validating and honoring a student’s cultural heritage a controversial issue among ed reformers? Why aren’t we building schools (including charter schools) that look like the best private schools that propel our poor black and brown students to the best universities in the country? Why are there so few African Americans resident fellows at reform-minded think tanks? Why isn’t the white philanthropic community going out of its way to fund black and brown thought leaders like me who can offer insight into which strategies will resonate with our students, parents, and communities?

Once we start implementing ideas based on these questions, then maybe–just maybe–we can devise a theory of change worthy to be called an ed reform “movement.â€