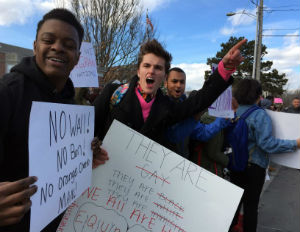 In Portland, Maine, one of the least racially diverse states in the nation, a white youth was charged with a hate crime and assault earlier this month. He allegedly brandished a sharp object and yelled racial slurs at a group of students near their high school.

Immigrant students in the U.S. didn’t have it easy before Trump. But now, in the wake of a resurgent nativism, some are layering anxiety and fear on top of theÂ trauma they experienced before coming here–in addition to the difficulties of adapting to a new country.

But the Portland community is rallying behind its immigrant students.

Here’s an excerpt from the Hechinger Report.

On a chilly December evening, King Middle School students and their families streamed into Ocean Gateway, a party space with sweeping views of Casco Bay. They had come to celebrate the culmination of a school project on freedom, just as many of the families were getting a taste of liberty themselves.

The students, a number of whom are Muslim immigrants from Somalia, had created posters and written essays that proclaimed their vision of American ideals. Some of their families had fled the war-torn nation that became subject toÂ the banÂ announced by President Donald Trump in late January for travelers from seven Muslim-majority nations.

In a divisive political climate, public schools are taking on the challenge of helping refugees who feel unsafe in a country that seems increasingly intolerant of them. The students’ work took on an even deeper meaning after a January 27 racially charged assault near Casco Bay High School, which spurred pro-immigrant rallies throughout the city.

“Islam is blamed for terrorism, but Christianity isn’t blamed for radical groups like the KKK,â€ said eighth-grader Zakaria Ali, 13, a student of Somali heritage who argued in his project that Muslims lose their freedom when Americans equate Islam with terror.

Portland is a progressive coastal city of trendy restaurants and Victorian homes, as well as housing projects and homeless shelters, in one of the whitest states in the country. Its diversity is evident – from the assistant principal at Deering High School, who is a Somali immigrant, to the former student and current math teacher at King Middle School, a Ugandan immigrant, to the Somali restaurateur whose son is studying for his law school entrance exams.

Republican Governor Paul LePage has said he supports President Trump’s travel ban and has sought to deny government benefits to asylum seekers, but Portland city officials have proclaimed support for their immigrant community.