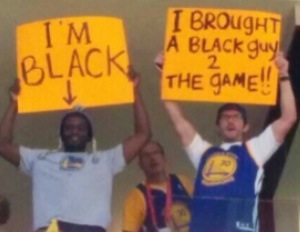 In the recording, Sterling made racist remarks towards black and Hispanic people, including former NBA player and Charlotte Bobcats owner Michael Jordan. He also told Stiviano not to bring them to his games or associate with them publicly.

The dispute began when Stiviano posted a picture with former NBA player Magic Johnson on her Instagram page.

TMZ Sports has the Instagram photo in question here. As of Monday, Stiviano’s Instagram page has over 140 thousand followers.

Twitter users have gone on the offensive, saying that Sterling’s racist comments have no place in the NBA. Many voiced their opinions with images insulting to both Sterling and the LA Clippers.

Various celebrities like Snoop Lion and Shaquille O’Neal have come forward to blast Sterling for his behavior, while Rev. Al Sharpton plans on protesting until the Clippers are no longer owned by Sterling.

Sterling’s remarks have already had major consequences. State Farm has chosen to stop advertising with the LA Clippers until Sterling is removed from his position, with interim CEO Steve Stoute saying “somebody has to stand up.”

State Farm pulls its sponsorship of the Clippers, with its CEO saying “somebody has to stand up.” http://t.co/de9jzqGgcn via @TheHerd

CarMax has also pulled its sponsorship from the Clippers, saying “the statements attributed to the Clippers’ owner [are] completely unacceptable.”

Certain users took Sterling’s comments and made light of them, especially his demand to Stiviano that she not bring any black people to his NBA games.

While the outrage was focused on Sterling’s comments, some users took a more direct approach to venting their disapproval at the now-tarnished reputation of the LA Clippers.

Update: The NBA has posted a tweet saying that it will hold a press conference concerning Donald Sterling tomorrow.