Racist Teen Charged With Changing Traffic Warning To Include N-Word 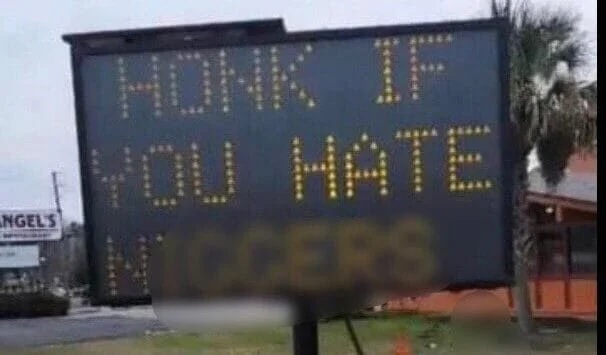 A 17-year-old was arrested in South Carolina over the weekend, charged with changing the traffic warning on a road-side sign to an offensive message including the n-word.

The privately-owned sign was being used to advise drivers about on-going construction. However, on Saturday afternoon the Sumter Police Department began receiving calls about the sign being altered to display “Honk if you hate n******.”

According to NBC 2, Sumter Police Chief Russell Roark immediately promised to investigate the incident, which he called a “scar on the city and its residents that is in no way indicative of the community where we work and live.”

By Sunday morning, authorities had received surveillance footage that identified the potential suspect, which they proceeded to share on the department’s Facebook page.

Hours later, the 17-year-old male suspect was in custody, charged with aggravated breach of peace. He is being held at a state Department of Juvenile Justice facility. Authorities have not released the underaged suspect’s name.

“The words and thoughts in this altered message are disturbing, deeply hurtful and are not indicative of our city,” Roark said in a statement. “We had a responsibility to our citizens to act quickly in this matter. The damage can’t be undone, but it was important for us to hold the person responsible for this accountable and prevent further incidents like this from happening.”

Sumter PD had offered a $5,000 reward in exchange for information leading to an arrest in this case, The State reports. They have not indicated if anyone claimed the reward, however.

The altered sign, which was located on South Pike West at the U.S. 76/378 bypass, belonged to a private paving company.

At this time, authorities do not believe the young man who was arrested has any connection to the company. Nor do they believe the company or any of its employees were involved.