Radio Personality Angela Yee is Stirring Up the Coffee Industry 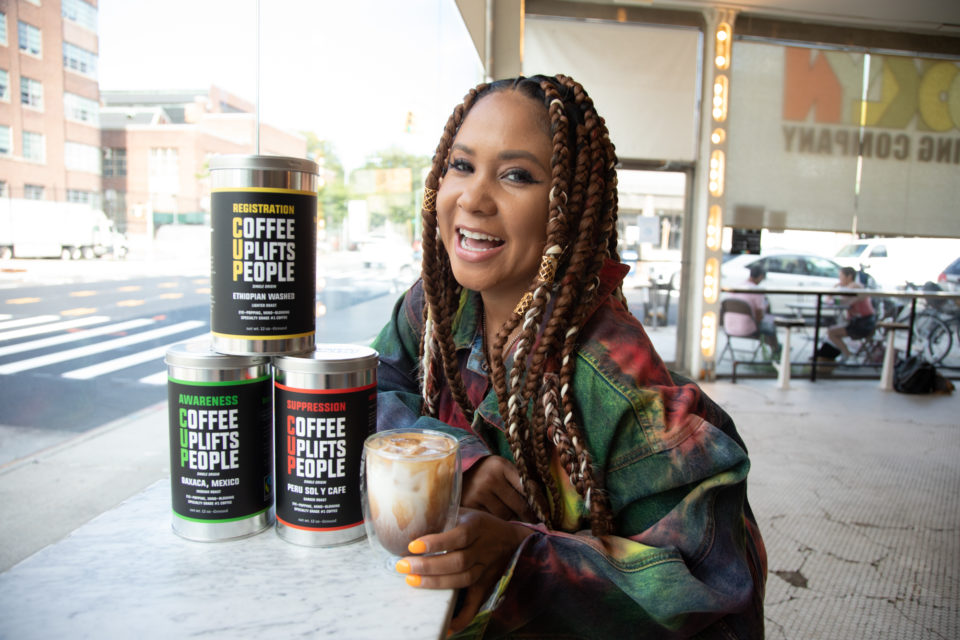 Angela Yee is best known as a co-host on the globally syndicated radio show “The Breakfast Club” alongside Charlamagne Tha God and DJ Envy. However, outside of being a 20-year radio veteran and media maven, Yee is a serial entrepreneur who’s taking the coffee industry by storm.

In addition to “The Breakfast Club,” the 42-year-old personality hosts a TV show on Fox Soul and a long-running podcast called Lip Service. Plus, she owns a juice bar in Brooklyn, N.Y., along with a hair store in Detroit. She’s also a real estate investor and the founder of a non-profit literacy and wellness program. On top of that, the Brooklyn native ventured into the coffee industry last year launching a specialty coffee brand called Coffee Uplifts People (CUP). Her idea for the company sparked after meeting with the founders of Brooklyn Roast amid the pandemic.  Through research, she then discovered that discriminatory practices have marginalized people of color in countries where coffee beans are harvested.

“Coffee beans come from all these different places [like] Ethiopia, Peru, Colombia, Mexico, Guyana, Jamaica,” Yee told BLACK ENTERPRISE. “I do feel like it’s something that is really ours, but we don’t get to partake in the fruits of that labor as much.”

Yee and her two business partners, Tony Forte and LaRon Batchelor, created CUP to bring inclusiveness and diversity to every facet of the coffee business and supply chain.  Not only have they created a coffee company with fair trade offerings, but CUP ultimately aims to shift the entire industry to become more equitable, especially for farmers of color.

“The amount of money that people make in coffee, I think, has been unfair for so long. So, now it’s time to make sure that the people who are actually the ones that are in these countries are the ones that are benefiting,” says the former hip hop marketing executive.

To create more of a balance, CUP is intentional on where their beans are sourced. Yee is also empowering local minority entrepreneurs by contracting all Black-owned businesses to build CUP’s brick-and-mortar shop, which is slated to open in the Bedstuy area of Brooklyn in August.

“We’re using all Black-owned businesses in the process of building that space out,” she says. From the interior designer to the architect to engineers to electricians, everyone involved in the development of the shop is Black.

CUP is currently distributed in 10 Rouses supermarkets and will be sold in other major retailers next month, including 11 Whole Foods around New York City and 16 Stop & Shop stores.  Additionally, consumers can also find CUP’s six initial flavor offerings in regional specialty fine grocers like Brooklyn Fare and Union Market.

CUP is just the latest addition to Yee’s growing portfolio of businesses. Even with her contract at iHeartRadio, she stresses the importance of generating multiple streams of income.

“You have to have an identity outside of your nine-to-five. So, that’s always been really important for me to be my own person outside of just being one of the members of ‘The Breakfast Club,'” she says.

“I’m just trying to make sure that I’m diversifying myself in ways that also make sense and is authentic to me,” she added. “Having a juice press whose company is authentic to me. I feel like the coffee company is, I feel like the hair store is. So, I’m trying to do things that make sense. I’m not into just making money for the sake of making money.”

Learn more about Angela Yee’s line of pressed juices, Brooklyn-based juice bar, and Coffee Uplifts People in the latest episode of The New Norm With Selena Hill below.