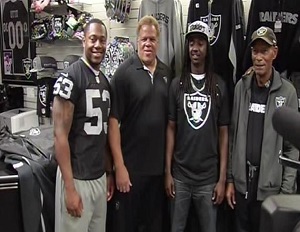 Remember Oakland teen Akintunde Ahmad with a 5.0 GPA and 2100 SAT score? Well, the 18-year-old, who is heading to Yale in the fall on a full scholarship, is continuing to receive recognition and rewards for his outstanding academic achievements.

On May 20, football hall of famer Willie Brown and three NFL players from the Oakland Raiders granted the young scholar with a shopping spree at the Raider Image Store, according to ABC7. In addition to a shopping spree, the teen, who was awarded $15,000 on Ellen Degeneres show last month, was also presented with a Windows Pro Surface computer from the team’s general manager Reggie McKenzie.

Outside of being recognized for his academic success, Ahmad, who plays three instruments as well as high school baseball, was also recently honored as Oakland region’s student athlete of the year by California’s governing body for high school sports.