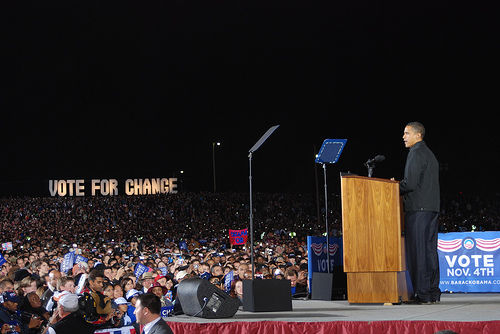 Barack Obama held his final campaign appearance at the “Change We Need” rally in Manassas, Virginia Monday night, a gathering cited as one of the largest in Prince William County history. (Source: Obama campaign)

Â
Voting had slowed down to a steady trickle by 10:40 a.m., when I conducted an exit poll at Precinct 307 in Richmond, Virginia. According to an election official, however, voters had been queued up in a line stretching around the block at 6 a.m. Polling was located at Ginter Park Presbyterian Church, in a mostly white, upper-middle-class neighborhood with beautiful, large old houses standing proudly on well-kept lawns.

At mid-morning, the weather was still wet with occasional periods of rain. Voters coming from the church were about 95% white and a good mix of young and old. Perhaps two-thirds of them were women. I stayed exactly 30 minutes. During that time, 15 people I questioned said they voted for Obama, zero said they voted for McCain, and nine refused to answer.

Next, I visited Richmond’s Precinct 306, located at the Police Training Academy on the campus of Virginia Union University. This historically black university is in a middle- to upper-middle class black neighborhood. A campaign worker for one of the city elections said about 150 people had been lined up there at 6:00 a.m. when voting started, and that more than 50% of the precinct’s registered voters had cast their ballots by 11 a.m.

Bryonna Jones, a Virginia Union University freshman who is a first-time voter, says she is very excited about participating in this election. “I voted for Barack Obama not only because I’m from Chicago like him, but because I really think this country needs a change. It’s time for a change, and I believe in everything that he is trying to do for this country. This is such a big mark in history. It is so big, and I’m really excited about it … My friend has a Barack Obama song out right now. So I’m really excited,” Jones says.

Jamie Powell, a 26-year-old Iraq War veteran who graduated in May from Virginia Union as a religion and philosophy major, voted earlier at Precinct 202 in Henrico County. He says he was on campus at the polls, “enjoying himself on this momentous occasion.” Powell says a good 300 people had been in line at 6:30 a.m. when he voted at Henrico High School, which is located in a predominately black area.

“I’ve been voting since I was 18. This is by far the most people I’ve ever seen out at the polls, especially the African Americans I’ve seen at the polls. I voted for Barack Obama not only because he is the best candidate, but I believe he has the best plan as far as getting our economy out of the situation that it’s in, and it’s time for a change,” says Powell, who is currently a youth pastor and attends graduate school in Atlanta.