Rain, Rain, Go Away: USTA Announces Arthur Ashe Stadium Will Get a Roof 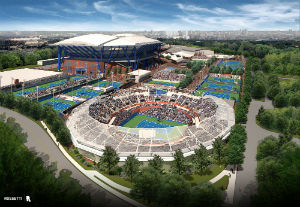 Artist's rendering of the transformation of the Billie Jean King National Tennis Center. Photo courtesy of the USTA.

Arthur Ashe Stadium, the crown jewel of the Billie Jean King National Tennis Center, is getting a retractable roof. It’s the most ambitious and costly component of the campuses $550 million transformation, which the United States Tennis Association says will tear down and relocate the Grandstand Court, renovate Louis Armstrong Court and create a more fan-friendly experience for the 700,000 fans that attend the US Open every year.

News of the announcement came in an email by the USTA Wednesday and the press conference was held Thursday morning at the Mandarin Oriental in Manhattan. It comes on the eve of the US Open, which kicks off Aug. 26. The entire project is expected to be completed in 2018.

“I think it’s important we go back a few years and look at 1978 when we moved from Forest Hills to Flushing Meadows,â€ said Dave Haggerty, chairman and president of the USTA. “We sent a message. The message was that tennis wasn’t for the country club, it was for the country. After that point in time, we have seen some dramatic growth with the US Open. In order to continue to make sure that the Open is one of the leading events, we have to make sure that the jewel is polished and the best that it can be.â€

Haggerty said the project is going to be funded by a combination of funding through bonds and revenue it generates within the organization. USTA officials said they wouldn’t raise ticket prices. “I think we’ve made it clear on every occasion, we’re not going to pay for this on the backs of our ticketholders,” said Gordon Smith, the USTA’s executive president. “That’s not one of the funding mechanisms that we’re looking at.”

The proposed changes to Louis Armstrong were presented as an artist’s rendering; it’s expected to also get a retractable roof. Other changes include a promenade that will allow fans to watch players practice, one of the great attractions of the other tournaments. Only about a hundred fans can watch players practice on the courts, situated right next to Arthur Ashe Stadium. “Now with a two-story viewing gallery, we can get a couple thousand people in that same general area,” said Danny Zausner, the tennis center’s chief operating officer. “They can actually choose which one of the five practice courts they want to watch. On the opposite side of that, those fans can also be watching tournament matches that have seating on all four sides.”

Jeanne Moutoussamy-Ashe, the widow of Arthur Ashe, says she’s pleased with the design.

“I always thought fabric was the way to go,â€ she said, alluding to a PTFE fabric, a revolutionary teflon coating which has a 30-plus year shelf-life, keeps the stadium cool and also diffuses light to minimize shadows on the court which is distracting to players. “I kept saying fabric, but no one really asked for my counsel. They probably don’t know that I’m the daughter of an architect.â€