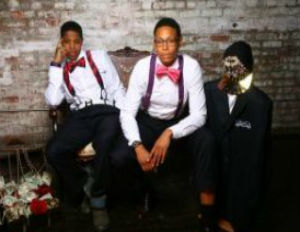 Conceptualized in June 2013 by Beckford, Rainbow Fashion Week was introduced to New York City and the United States as the first inaugural eight days of Queer Pride Fashion Shows with a social responsibility message. Endorsed by Mayor Bill DeBlasio as “An Official New York City Pre-Pride Fashion Event,â€ RFW displays the skills of out and proud LGBT fashion industry insiders. Every aspect of the production—from the hair and makeup artist, celebrity stylist,Â designer, choreographer, and set designer–RFW brings youÂ the “Art of Fashion in Not Your Average Fashion Shows.â€

It was also in 2013 that Beckford launched Jag & Co. Clothier from her family’s brownstone in Stuyvesant Heights, Brooklyn. “I started the company for women who are more gender fluid and prefer clothing that is masculine identified,â€ says the designer. “I realized that we had a lot of issue with the regular retail industry, how we shop, what we buy. Women feel uncomfortable shopping in the men’s departments. They also face issues with how men’s clothing fit them. The female bustline, for example, pulls the material of a men’s-style vest forward, making the back bunch up. She notes that transgender men, particularly those who are in the process of transitioning, are coming more and more to Jag & Co’s ecommerce site. Beckford also gets a lot of custom orders.

Queer style is social movement, she says, noting that RFW is more than seeing new clothing designs and is about presenting an overall actual fashion experience–the artistry of hair, makeup, and styling. She adds that RTF also is meant to create access for others in the industry. “The average designer doesn’t have access to a portal like New York Fashion week. And the average buyer gets his or her fashion (tips on style) from a mannequin display at a department store.”

Because the goal of RFW is not only to support the business of queer style, but also to foster a social responsibility, each fashion installment becomes a platform for activism and the promotion of sustainability. RFW isÂ providing awareness to the following causes: global water crisis, anti-bullying, anti-domestic violence, body positivism, marriage equality, trans-justice, LGBT youth homelessness, among other major issues still facing the LGBTQ community.

Beckford is educating new designers of the responsibilities they bear when ordering, utilizing, and disposing of textiles and to consider biosafe vendors. There is a call for the City of New York to mandate dog waste composting through RFW’s Rainbow Pets event; recycle, re-purpose, and re-use clothing through its Dumpster Divers event. FIT meets MIT during a fashion hackathon for solar energy wearables as part of its “Kids Who Tech” event.