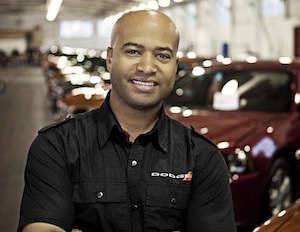 Fiat Chrysler Group announced that director and lead designer of the award-winning 2005 Chrysler 300C, Ralph Gilles, would take over as Head of Design within the company.

With years of experience in the automobile industry, Gilles started his career as a designer with Chrysler in 1992 and quickly rose through the ranks to oversee design for Chrysler, Dodge and Jeep vehicles. He was listed as one of America’s Top Black Designers by Black Enterprise in 2005 and has previously served as Senior VP of Design for the Chrysler Group, CEO of Dodge and CEO of Chrysler’s Street and Racing Technology division. He is the executive sponsor of the Chrysler African American Network (CANN) and plays a supporting role with The Chrysler Global Diversity Council.

Gilles holds a degree in design from the College for Creative Studies in Detroit and a master’s in business administration from Michigan State University. As one of the top creatives in the business, he has numerous industry awards under his belt including the Automotive Hall of Fame Young Leadership and Excellence Award, Black Engineer of the Year President’s Award and The Michigan State University Eli Broad Graduate School of Management Young Alumni Achievement Award just to name a few.