Rand Paul Clashes With Student During Speech At Howard University 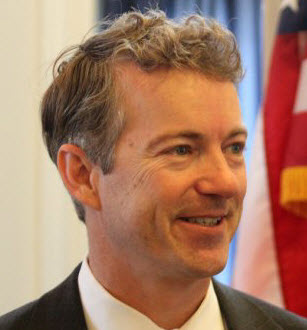 In an attempt to build a bridge between the Republican party and black voters, Rep. Rand Paul (R-KY) visited the campus of Howard University to discuss the GOP’s “daunting task” of recruiting minorities.

During a speech, Paul championed his party as leaders inÂ eradicatingÂ the south’s Jim Crow laws.

“Several generations of black voters have never voted Republican and are not very open to considering the option,â€ Paul said to a group of black students and faculty members in an on-campus auditorium.

The politician was briefly interrupted during his speech by a young man with a banner that said the university did not support “white supremacy.” The man was removed from the auditorium.

Paul was also queried on his stance on the Civil Rights Act of 1964 and argued that the Democratic party failed on delivering jobs and “meaningful success.” While many Howard students said they did not agree with Paul’s statements, they did give him credit for having the courage to speak in front of a crowd that, for the most part, did not support him.