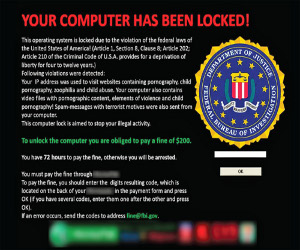 Ransomware, a type of malware that renders a computer unusable until a victim pays a “ransomâ€ is on the rise, according to the FBI, and several other industry experts.

“The scale of the threat is growing,â€ says Dan Nadir, Senior Director of Product Management of Small Business for Symantec. He says small and midsized businesses should prepare for a new world of digital threats, quite different from the old days of viruses and worms.

No longer is it enough to infect PCS or just steal information, Ransomware locks down a computer completely until a payment is sent to the hijacker.Â Ransomware programs also may try to embarrass victims to get them to comply quickly, using tactics such as displaying adult images.Â Often even if you pay the amount requested, the computer remains unusable and the user is left having to pay a technician wipe the PC.

Payment is often demanded through some type of online currency, such as Webmoney or eGold, although wiring money via Western Union is not uncommon.Â Symantec, in a recent report, estimates this scam nets the people behind it up to $5 million dollars a year.

This threat is even greater for small businesses where a computer may be used by several people or for several tasks and any downtime would lead to lost revenue or customers.

The report says small business owners can reduce their chances of being hit by ransomware by having strong password security and not reusing office passwords on external sites. Keeping software update will also reduce the chance for hackers to exploit security vulnerabilities. Businesses should also back up their data so they aren’t forced to pay a high price, just to get their own data back.