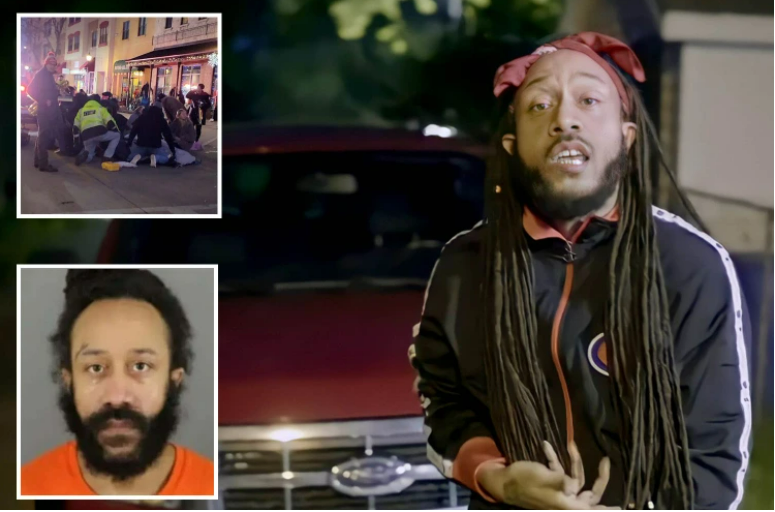 A person of interest has been identified in Sunday’s Christmas parade tragedy in Waukesha, WI, Sunday that killed five people and injured more than 40.

Darrell Brooks, 39, is currently being questioned over the deadly crash by law enforcement officials, according to NBC News, but has not been charged with a crime at this point. CNN reported Brooks may have been fleeing the scene of another crime when he drove into the Waukesha parade route.

According to multiple sources the incident is not connected to the Kyle Rittenhouse verdict and wasn’t an act or connected to an act of domestic or international terrorism.

According to TMZ, Brooks used the rap name Mathboi Fly and made a rap video some years ago.

And according to reports, the video he made featured a red SUV that appeared to be found after the parade incident.

Brooks was recently released on bond stemming from a Nov. 5 case in which he was charged with resisting or obstructing an officer, reckless endangering safety, disorderly conduct, bail jumping, and battery. Brooks was also charged last year with reckless endangerment and illegal possession of a firearm, according to court records.

Witnesses described a horrific scene of people stuck or lying on the ground after a red SUV drove through a series of barricades and into a crowded parade route. The belongings of many who attended littered the streets Monday morning as authorities continue to piece together what happened and who was affected.

None of the deceased have been identified yet, but five people are confirmed as deceased. Waukesha Police Chief Daniel P. Thompson said it was working with the Waukesha County Medical Examiner’s Office to identify victims.

While authorities have not released the name of the deceased, the Milwaukee Dancing Grannies, a choreographed dance/pom pom parade group said several of its members were victims.

“Our group was doing what they loved, performing in front of crowds in a parade putting smiles on faces of all ages, filling them with joy and happiness,” the group posted on its Facebook page.
“Those who died were extremely passionate Grannies.”