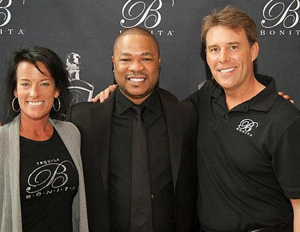 Hip-hop legenda and television star Xzibit is on a 33 city tour for the next 20 months to promote his new co-branded tequila. His promotional campaign includes autographs signs, such as the one he hosted Â in Las Vegas last friday.

The rapper, whose real name is Alvin Nathaniel Joyner, got his start as a rapper, working with Dr. Dre, Snoop Dogg and Eminem. He also hosted on MTV’s very popular “Pimp My Ride.”

Xzibit partnered with Chris Brown, who started the Bonita Spirits company in 2010, & together created what they call the “world’s first five-times distilled tequila”, created from 100% blue weber ageve.

The tequila, named Bonita Tequila comes in a pure crystal packaging, wrapped in a satin-lined box for a true luxury feel. The brand’s marketing say’s it aimed at “hip urban savvy consumers”.

Xzibit not on is partner in theÂ tequila, he’s a fan as well.Â “The tequila was amazing,â€ he said. “The packaging was beautiful and dynamic, and the brand was perfect.”